The ZS feels too firm, especially with the larger wheels of the range-topping Exclusive model fitted. They crash into bumps and the suspension feels less compliant than the smooth C3 Aircross'.

With increased speed, less desirable handling characteristics become apparent – notably a swaying sensation. While the effect on motorways isn't especially dramatic, it does cause fairly pronounced body lean when cornering briskly, which detracts from driving enjoyment. 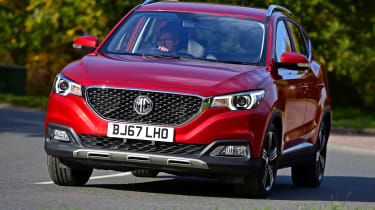 Not only does the car sway from side to side in corners, but also fore and aft when braking or accelerating. It's not an uncomfortable experience, but means the ZS never feels truly composed when being driven spiritedly. It's a shame, because the steering seems to have been set up for a sportier feel. It's relatively firm and made even more so if you engage 'dynamic' mode. Doing this doesn't bring any increase in feedback, so things feel rather disjointed as a result; we’d recommend leaving it set to Normal.

A lighter, more generously assisted steering mode is available and this suits the ZS rather better. It feels a little ponderous, but allows far easier maneuvering and a more nimble feel on crowded city streets.

MG ZS buyers can choose from two petrol engines. The least expensive is a 1.5-litre, four-cylinder of fairly conventional design, connected to a five-speed manual gearbox. However, MG expects most customers to go for the more sophisticated three-cylinder 1.0-litre engine, which can only be chosen with a six-speed dual-clutch automatic gearbox.

This engine was developed jointly with General Motors and produces 108bhp. Performance is adequate rather than sparkling: 0-62mph takes 12.4 seconds, but a top speed of 112mph means a high motorway cruising speed doesn't pose too much of a problem. It's an impressively quiet engine, too. Downsides are that the automatic gearbox isn't as responsive as we'd like – it hesitates noticeably when you issue the command to change gear and occasionally picks the wrong one. And, perhaps because the engine has to work quite hard, it's not particularly economical.

With less pulling power and being slightly heavier, the 1.0-litre ZS can’t match the equivalent Citroen C3 Aircross or SEAT Arona for pace, particularly when accelerating between 50-70mph in top gear, where the ZS took twice as long as the Arona in our testing.