Practicality is an MG ZS strong point, with a spacious interior and large boot

The MG ZS demonstrates its true calling with a well proportioned interior that should see it fitting nicely in with family life. The boot is a decent size and there's plenty of space inside, while a light 'urban' power steering mode makes low=speed manoeuvring remarkably easy. 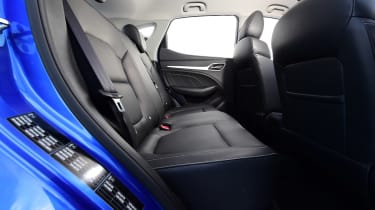 Settling behind the wheel isn't as easy as it might be. Although the steering column can be adjusted for angle, it doesn't adjust for reach. Thankfully, there's a lot of fore and aft adjustment in the driver's seat and most will be able to find a comfortable position without too much fuss. The driver's seat, incidentally, is nicely supportive and well-padded.

MG boasts that the ZS has around 80mm more rear headroom than average in this class of car and this claim seems to prove accurate in the metal. There's space inside for four adults to travel without feeling too cramped, while a fifth can take a seat at the middle of the rear bench, providing they don't mind rubbing legs with the others. 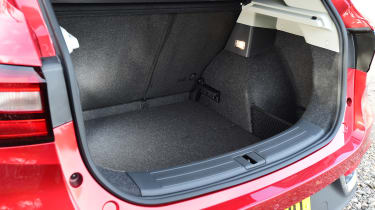 Still more generous is the MG's boot space, which, at 448 litres with the rear seats in place, is 94 litres more than offered by the Nissan Juke. The rear seats split and fold in the usual 60/40 manner, but no figure has been provided for the total boot space when the rear seats are folded out of use.