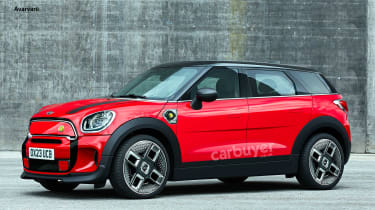 MINI will overhaul its range in the next few years, with the next MINI hatchback and MINI Countryman set to be joined by an SUV. All three will feature electric powertrains as the brand transitions to a fully battery-powered line-up, with plug-in hybrids unlikely to feature. It’s also looking likely that the MINI Clubman estate and MINI Convertible won’t be replaced.

The brand’s boss, Bernd Körber, has told our sister site Auto Express that the plan for MINI’s next-generation range is nearly complete.

”We only go into segments where we can bring the MINI DNA; this is the guideline on how we develop our portfolio”, Körber said. “The Countryman will move into a larger segment and the new hatch will go smaller, which makes space for another crossover.” Our exclusive images preview how the three cars might look when they reach showrooms. 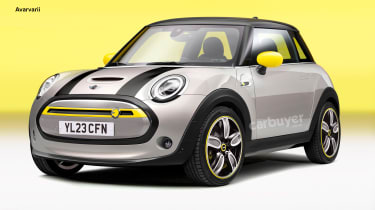 The replacement for the iconic three-door MINI is set to be smaller than the current car, to take the brand closer to its roots. With modern safety and technology considerations, it won’t be as small as the classic MINI but we’re told it’ll be as compact as possible. It’ll probably be a similar size to the new electric Fiat 500, and it’s thought the car will have easily recognisable styling and the retro touches that buyers love.

Petrol and electric versions will be available but we expect the car to only be sold as a three-door model. The EV will be built in China on a dedicated platform, while the petrol one is likely to be built in Oxford using a version of the current MINI hatch’s architecture.

Following the next MINI hatchback will be an all-new MINI crossover SUV, which will rival the Nissan Juke, Ford Puma and Renault Captur. We expect it’ll replace the MINI 5-door hatchback, and it’ll use the same platform as the upcoming electric MINI mentioned above. Unlike the hatch, it’ll be only sold as an electric model, but it’s too early to suggest how far it’ll go on a charge and how quickly the batteries can be recharged. It may bring back the MINI Paceman name.

On the crossover’s styling, Körber explained how it’d look different to the hatchback: “You cannot put the three-door hatch face on a compact size SUV. That doesn’t work - but customers want the face [and] the friendliness.

”MINI is very much associated with the three-door hatch; that’s what drives the brand. But I would love to see a development. Look at Porsche, where you have the core model, the 911, but you have an evolution of the brand in authentic areas. And with that also comes design changes. You adapt the design to the segment.” 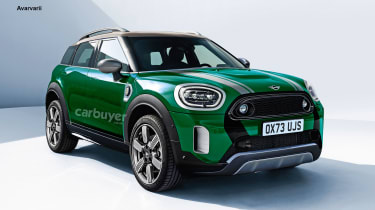 The upcoming MINI Countryman replacement will grow slightly in size, so it’ll offer a bit more interior space and will more closely rival the BMW X1 and Audi Q3. An electric version will be sold alongside combustion-engined models, and the EV will take the place of the plug-in hybrid. Körber hinted that the electric Countryman could have a range of around 250 miles, which would make the PHEV redundant. Like the current car, it’ll be built on a BMW platform.

See what other cars you can look forward to in the next few years, or read about the next-generation BMW X1 here.