The first MINI Countryman was certainly a step up in practicality over the regular MINI hatchback and the latest version adds to that, as the car has grown slightly. The increased exterior dimensions mean more space for passengers and their belongings, so the Countryman makes a very versatile family car.

Although those up front should have no reason to complain, occupants in the back of the Countryman will particularly notice the improvements in passenger space compared to the previous version. Kneeroom has seen particular improvement, while there’s no shortage of headroom. The rear seats can even be reclined and slid back and forth to find a balance between boot space and passenger relaxation. 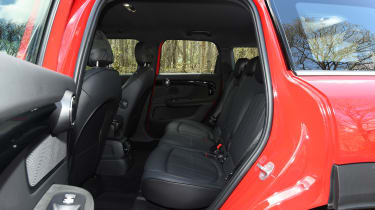 The rear door openings have been enlarged compared to the previous car, so getting in and out of the back of the Countryman is now notably easier. The front and rear doors each have storage pockets to take a one-litre drinks bottle and there’s a storage compartment in the centre console. There are also two cup-holders beside the gear selector.

Adding to the Countryman’s credentials as a practical family car is a boot that, at 450 litres, 100 litres bigger than that of the original model. In fact, it’s 70 litres more than the boot of a Volkswagen Golf, and expands to a mammoth 1,390 litres if you fold the rear seatbacks down. There are clever features, too, such as a picnic cushion that folds out from under the boot floor and a powered tailgate. 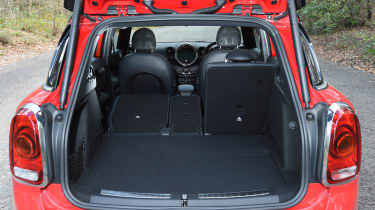 It’s worth noting that the Cooper S E PHEV has a slightly smaller boot, as the car’s hybrid components sit below the boot floor, robbing it of 45 litres for a total capacity of 405 litres.