The MINI Countryman isn’t as nimble as the hatchback, but it’s still fun to drive

From the day the original Mini arrived in 1959, the way cars bearing the badge drive has been key to their appeal. By and large, today’s MINIs stay true to the responsive, nimble feel of the original, and given its considerable bulk, the latest Countryman acquits itself well, meeting the demands of relaxed and determined drivers alike.

It also shrinks around you and when the road opens up, you feel like you’re behind the wheel of something small and sporty. The steering is accurate, with just enough weight for the driver to feel involved, but on a really challenging road, you're reminded the Countryman is rather a heavy car, lacking the dart-like responsiveness of the MINI hatchback.

There’s an optional Dynamic Damper Control available, allowing you to adjust the softness of the suspension and enabling further personalisation of the (also optional) MINI Driving Modes. This lets you choose how sensitive the accelerator is and how much power assistance is given to the steering, for a more on-edge driving experience if desired. 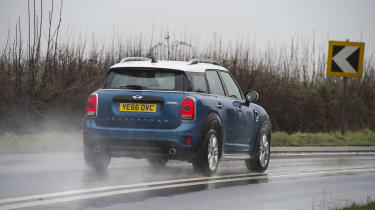 If you push really hard, you’ll feel the body leaning a little in corners, but you’re unlikely to run short of grip – especially in cars with the ALL4 four-wheel-drive system. This usually sends power to the front wheels, with drive to the rear being engaged automatically when computers sense it’s necessary. You can also manually engage power to all wheels yourself.

The extra weight of the Cooper S E Countryman ALL4 plug-in hybrid is considerable – those batteries and the electric motor add 130kg to a regular Cooper S. In some ways it actually helps, though, as the steering feels a little less twitchy while agility remains largely intact. On other models, though, we’re less sure ALL4 is an option worth having. The Countryman isn’t really suitable for off-road driving and while the system does improve traction on the road, the front-wheel drive car is fine in most situations and cheaper to run.

We’re more impressed by the Countryman’s ride quality. The suspension isn’t soft – you can still clearly feel potholes as you pass over them slowly at urban speeds – but the ride becomes smoother as the car gathers speed. Motorway miles pass in an unruffled, relaxed manner in keeping with the more mature feel we mentioned earlier.

Unfortunately, ride quality is one factor where the S E Countryman ALL4 plug-in hybrid does lose out compared to other models in the range – its suspension has been stiffened to cope with the extra weight and you feel the difference over bumps.

The Cooper D Clubman's 2.0-litre diesel engine develops 148bhp and is available with front-wheel drive or ALL4 four-wheel drive. It should be plenty powerful for most motorists, enabling a 0-62mph time of 9.1 seconds. It’s an impressive engine, feeling smooth and only starting to sound strained at higher revs. 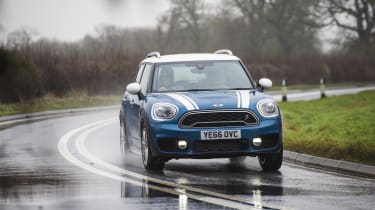 The entry-level Cooper Countryman has a 1.5-litre turbocharged petrol engine that emits a pleasingly rorty exhaust note on acceleration. Its 136bhp is enough to whisk it to 62mph from rest in 9.7 seconds, so it doesn’t feel sluggish, although its substantial 1,365kg weight puts it at a disadvantage compared to some smaller-engined rivals.

It's also somewhat overshadowed by the 2.0-litre, four-cylinder turbocharged engine of the Cooper S. With 189bhp, it enables a 0-62mph time of just 7.6 seconds. It doesn’t feel quite as neck-snapping as the MINI Cooper S hatchback, though. Enthusiastic drivers will enjoy the sporty noises the Cooper S exhaust makes, particularly when Sports mode is engaged through the dynamic drive menu.

This can adjust mechanical settings for a more involving driving experience and is very effective, although it can’t overcome the physical limitations of the Countryman’s considerable weight.

While likely to remain something of a rarity, there's also a MINI Countryman John Cooper Works with a huge 302bhp and four-wheel drive. This enables it to leap from 0-62mph in just 4.9 seconds, rivalling performance crossovers like the Audi SQ2 and Volkswagen T-Roc R for pace. 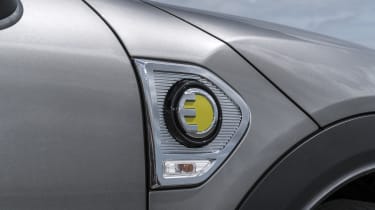 The Cooper S E Countryman ALL4 uses the same combination of a 1.5-litre petrol engine and electric motor as the BMW 2 Series Active Tourer plug-in hybrid. Working together, the pairing adds up to 221bhp, which is enough for a 0-62mph time of 6.8 seconds – noticeably faster than the regular Cooper S. Its immediate get-up-and-go is largely thanks to being four-wheel drive, but unlike other ALL4 models, the petrol engine powers the front wheels and the electric motor takes care of the rears.

When driving in all-electric mode – the 87bhp electric motor can get you to 78mph alone – the S E is effectively a rear-wheel-drive car, although you don’t really notice the difference. The impressive top speed when running on electric power means you never feel short of power in the urban areas where such cars excel. In fact, if you’re travelling under 40mph, power is so plentiful that it takes a really hard kick on the accelerator to wake the petrol engine.

The all-electric performance feels spirited up to 60mph, but beyond that you really do need the petrol engine if momentum is to be maintained. Unfortunately, once the all-electric range is depleted, or when tackling roads that hybrid mode doesn’t suit, the batteries and electric motor are turned into heavy, economy-sapping extra baggage.