Running costs have always been a MINI strong suit, and actually getting a MINI Countryman on your driveway can be temptingly affordable. Compact SUVs have never been more popular and the fact the Countryman is a sought-after secondhand buy, with high resale values, means monthly finance costs can actually be lower. 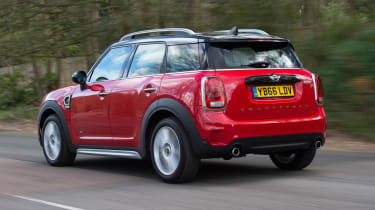 The economy headlines all belong to the hybrid Cooper S E PHEV. MINI claims it can run for up to 29 miles on electric power alone and also that 90% of its buyers drive no more than 30 to 40 miles a day. If this is true, the Countryman hybrid seems a perfect fit. Private buyers might baulk at its expense to buy outright but company-car users will see the appeal of its low 40-46g/km CO2 emissions – placing it in the lowest Benefit-in-Kind (BiK) tax banding for company-car drivers.

Its fuel economy of 141.2-156.9mpg will be of more interest to private buyers, though, and a day-to-day electric driving range of 15-18 miles is more likely. There’s clever technology to help you eke that range out as far as possible using sat-nav information, it can work out which portions of your pre-programmed route are best suited to all-electric power and it knows to preserve battery power until you reach a built-up area.

The most economical conventionally powered MINI Countryman Cooper is the 148bhp 2.0-litre diesel version, which can return up to 52.3-56.5mpg or 47.1-51.4mpg when four-wheel drive is chosen. CO2 emissions are also higher for the ALL4 version, making it wise for business drivers to stick with front-wheel drive.

The entry-level 1.5-litre 136bhp petrol engine can return up to a respectable 38.7-42.8mpg and will be a sensible choice for those who make frequent short journeys on which a diesel engine can’t always deliver its best efficiency. The Cooper S, with its turbocharged 2.0-litre petrol engine, can manage up to 38.7-40.9mpg.

After the first year’s CO2-based tax (typically included in the on-the-road price), petrol and diesel MINI Countryman models cost £150 a year to tax, while the hybrid costs £140. Those with a list price (including options) of more than £40,000 are liable for an additional surcharge of £325 a year in years two to six, bringing the annual bill to £465 or £475 during that period.

Servicing your MINI follows a condition-based regime, with the frequency and nature of workshop visits being determined by sensors around the car that measure things like oil purity. The first oil change is likely to be indicated as due at around 12,500 miles, with subsequent changes every 18,000 miles after that. MINI offers TLC service packages to meet the needs of most motorists, containing the service costs for your first three years or 36,000 miles of ownership.

Wear-and-tear items like brake pads are automatically monitored, while the on-board computer will let you know when the car is due an inspection, based on time elapsed and by monitoring the way your car is driven.

All UK MINIs are covered by a three-year/unlimited-mileage warranty, which has become pretty much the European industry standard. It’s not a bad warranty package, but does look less than generous in the light of those offered by South Korean carmakers – Hyundai offers a five-year/unlimited-mileage policy while a new Kia is supplied with cover for seven years or 100,000 miles. You can, though, pay for your warranty to be extended by your MINI dealership after the policy provided with the car has expired.