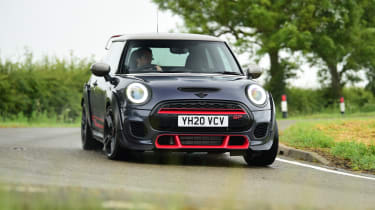 This is the MINI John Cooper Works GP, the most track-focused version of the three-door hatchback. Just 3,000 will be built, with 575 allocated to the UK market. It's only the third time the 'GP' badge has been used, with this car following in the footsteps of the models launched in 2006 and 2013.

Read our in-depth review of the MINI Hatchback

The same recipe of cutting weight - there aren't even any back seats - adding stiff suspension and fitting sporty tyres has been carefully followed, but the engine has grown in size. It's now up from 1.6 to 2.0-litres, with a turbocharger instead of a supercharger, and power has increased to 302bhp. The days of the original Mini struggling at motorway speeds are long gone; this GP model can blast to a top speed of 164mph.

Despite front-wheel drive, a 0-62mph-time of 5.2 seconds is mightily impressive too, beating the 5.7 seconds of the heavier Honda Civic Type R. There's a hint of turbo lag below 2.500rpm, after which the engine pulls relentlessly all the way to the 6,500rpm rev limiter, with a limited-slip differential and eight-speed automatic gearbox help deliver all the car’s power without incinerating the front tyres. The engine could sound better but plentiful exhaust noises from the stripped-out rear compartment, which doesn’t have rear seats, all add to the motorsport vibe.

Handling is as pointy as you'd expect from a MINI with semi-slick tyres and along with suspension upgrades, you'll have noticed the GP also has more aerodynamic extras than any previous MINI. The huge bi-plane rear spoiler and black wheelarch extensions make even the controversial Civic Type R look reserved and provide real downforce once on the move. To our eyes, the two earlier GP models looked a little classier than this latest version, while the carbon-fibre bodywork does give the car a wider stance, it does look like an afterthought rather than an essential addition. 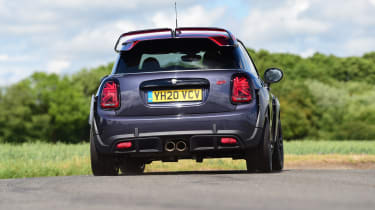 Every GP will come with the same look, which includes ‘Racing Grey’ bodywork, a ‘Melting Silver’ roof and ‘Chilli Red’ highlights for the GP logos, spoiler and front air intake, so there's no way to change its design from factory. The alloy wheels are 18-inch lightweight forged items and other highlights include front bucket seats, 3D-printed metal shift paddles, a 3D-printed fascia panel with each car's unique build number, and a digital instrument cluster with GP graphics.

The JCW GP is MINI's most focused model yet, so fuel-efficiency clearly wasn't top of the list during its development. However, the 2.0-litre petrol turbo engine can be reasonably efficient when driven gently, and it should be possible to coax the GP to around 34mpg. That's down from 40mpg in the standard JCW and 49mpg for the regular MINI Cooper. The Renault Megane RS Trophy gets around 35mpg, while the Honda Civic Type R returns up to 33mpg. 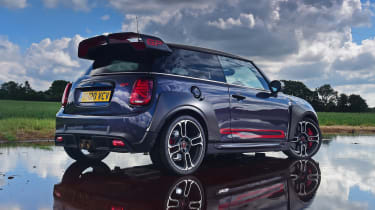 Road tax will cost £150 a year, the car sits in the top Benefit-in-Kind (BiK) band for company-car drivers, and insurance is likely to be expensive. Expect the GP to work its way through its semi-slick tyres at a fairly brisk pace; a combination of the relatively soft compound and the car’s substantial power means the front tyres in particular will wear quickly. Maintenance will be more costly than for a standard MINI because the high-performance tyres and brakes will cost more to replace, but as track cars go it shouldn't break the bank.

This is only the third time MINI has seen fit to apply the 'GP' name to the JCW, so be in no doubt this is a fully fledged performance model designed to be better at clipping apexes than sitting in traffic. Its 2.0-litre turbocharged petrol engine is closely related to the one found in the Clubman JCW, producing 302bhp and 450Nm of torque. One big difference is that here power goes to the front wheels, instead of all four.

While this could be a recipe for disaster, we found the addition of a limited-slip differential and the engine's smooth power delivery helped the GP accelerate without wrenching the wheel from our hands or overwhelming the front tyres. 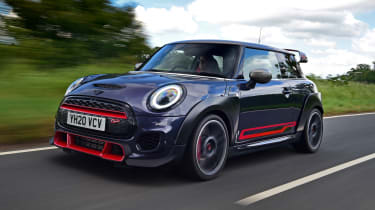 Acceleration from 0-62mph in 5.2 seconds is 0.7 seconds faster than the Civic Type R can muster, and the GP's 164mph top speed is the highest of any production MINI ever. There is a small hint of turbo lag below 2,500rpm, but go above this and it's comfortably capable of shoving you back into your seat at full throttle all the way to the 6,500rpm limiter. Despite all of the available thrust, the four-cylinder engine doesn't emit a particularly thrilling soundtrack to match its pace. With the rear seats removed, the stripped-out rear compartment adds to the acoustics, making it sound pretty raw, with backfires and snarls from the exhaust filling the interior.

Some fans will be disappointed the GP is only available with an eight-speed automatic gearbox instead of a punchy manual like the Honda's. While there’s no doubt this is an astonishingly quick hot hatchback, it is held back by the gearbox, which feels slightly off the pace when compared to the engine. Even if you use the 3D-printed steering wheel-mounted shift paddles, the changes lag slightly behind the action, or just don’t happen at all in certain situations.

With 302bhp going to the front wheels, and even once the tyres have found grip, the power delivery can still be frantic at times, leaving you clinging to the steering wheel as the electronic front differential struggles to channel the car’s power to the road. 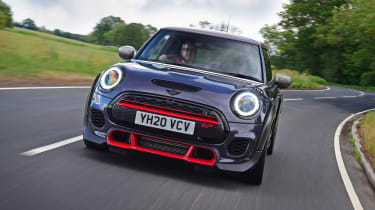 Handling has been sharpened up, not only by the stiffer, 10mm lower and more heavily braced suspension, but by the GP's lairy bodykit and gigantic rear wing. At higher speeds they produce downforce and the rear of the car does feel pinned to the road as a result.

On twisty roads is where the GP really excels, with the front of the car having a significant amount of grip at speed without a hint of any understeer. Turn-in is super sharp and agile, with the car hunkering down in corners at a staggering pace. It’s a strong indicator that most drivers will need to visit a racetrack in order to exploit the GP’s full potential.

Despite a motorsport feel, the GP retains the standard MINI's quality finish

As mentioned above, there are no rear seats in the GP because they've been removed to save weight. Refinement is worse as a result but this GP is a more comfortable car than earlier versions. Although the suspension is undeniably firm, it still absorbs the majority of bumps and you could feasibly drive the GP every day if you wanted to. We suspect it will be a weekend toy for most owners, though. 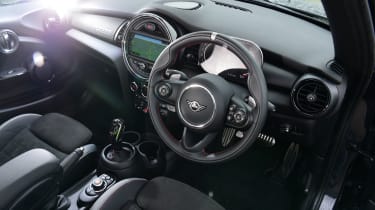 Highlights of the GP interior include a bright red strut brace spanning the width of the car and impressive sports seats with lots of support. Buyers can also decide how hardcore they want their GP to be, with luxuries like sat-nav, climate control and heated seats all available in the form of a GT Touring Pack costing £2,000 extra. These will add some weight but for the fractional impact on performance, we'd still rather have the ability to keep cool. 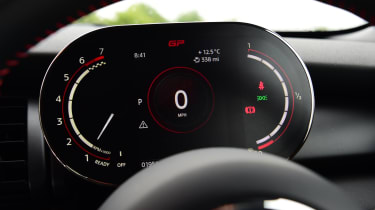 The dashboard is fitted with a 3D-printed fascia panel bearing the number of the individual GP in the limited production run. You also get a digital instrument cluster with GP graphics, a leather steering wheel and a 6.5-inch infotainment display.

No rear seats but this provides some extra luggage space

Obviously the GP isn't the MINI you choose if you need to carry more than one passenger, as it's strictly a two-seater. The front is just as spacious as before, and there are even some features like a central armrest that, surprisingly, have been spared the chop. 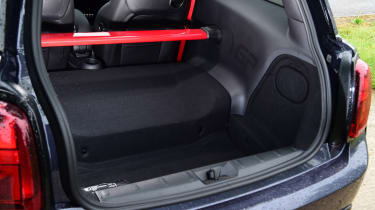 With no back seats, the boot is simply an open cavity, although it is at least nicely trimmed in black carpet. You may think this actually makes the GP more practical, and in some ways it does. However, the floor isn't flat and a thick strut brace spans the compartment, so it's only really suitable for smaller items. MINI quotes luggage capacity as being 612-816 litres.

The MINI Hatch is a very popular car in the UK, often appearing in the top ten sales chart, so it's reassuring to know that only 8% of MINI customers reported a fault with their car in the first year. The brand didn't perform as well as hoped in other categories, though, coming only 26th out of 30 manufacturers overall in our latest Driver Power survey. 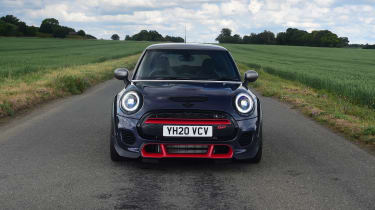 Safety shouldn't be too much of a worry, and the grippy tyres and large brakes will offer tremendous stopping power. It may be necessary to drive with caution using the track-focused tyres in wet or cold weather, however, or swap them during winter months. The standard MINI Hatch scored four out of five stars when crash-tested by Euro NCAP.