It's CarBuyer's third birthday, so we take a look back at our best car reviews 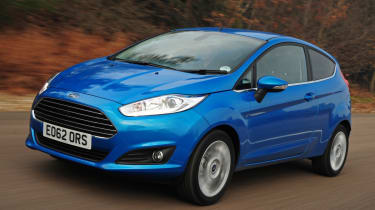 CarBuyer is three years old this week and to celebrate, we’re putting together a review of our most popular content over the past three years.

Today, we’re looking at our best-performing reviews – and the ones viewed most by you. The results are fascinating, and feature everything from superminis to 4x4s – with traffic coming from places as far-flung as Malaysia, Australia and the USA.

Unsurprisingly, the popular Ford Fiesta tops our list of the most searched for cars on CarBuyer since November 2010. It has been the UK’s best selling car since its first full year on sale in 2009, and continues to impress, thanks to its blend of head-turning looks, low running costs and value-for-money pricing. More than 408,000 of you have looked at our Ford Fiesta review since 2010 – making it CarBuyer’s car review champion.

Next up is the Kia Sportage – an altogether different car to the Ford Fiesta. Its striking looks, decent practicality and bargain price make it an attractive alternative to your average family car – yet its low running costs and seven-year warranty mean it shouldn’t be any more expensive in the long run.

The Honda Jazz – or Honda Fit as it is known in some markets – has been a popular model for CarBuyer week after week since the site launched in 2010. It comes with a flexible interior, impressively low running costs and a decent level of standard equipment. What’s more, with a new model on the way, we expect the Honda Jazz to continue as one of the UK’s most searched for cars.

Although the Ford Focus is the UK’s second best selling car of 2013 so far, it can only manage fourth place in CarBuyer’s rundown of our most popular content. That said, the Focus remains one of the most fun to drive family cars, and thanks to a new range of efficient petrol and diesel engines – it’s one of the cheapest to run, too.

We’re hardly surprised to see the Nissan Qashqai in CarBuyer’s top 10 most searched car reviews. It has proved to be a massive sales success in the UK since its launch in 2007, and more than 254,000 of you have taken a look at our opinion over the past three years. There’s a new model on its way, and providing it retains the old model’s low running costs, high driving position and decent practicality, it should be just as popular.

The Volkswagen Golf is now in its seventh generation, and is proof that things tend to get better with age. The new car is more spacious, better to drive and even more economical, and with a noticeable improvement in interior quality – is even more desirable. It’s currently the fifth best selling car in the UK so far this year, and CarBuyer’s sixth most popular review.

The Skoda Yeti re-wrote the family car rulebook when it went on sale in 2009 thanks to its van-like practicality, efficient petrol and diesel engines and rock-solid reliability. It has performed consistently well in the Auto Express Driver Power customer satisfaction survey and with a new model on its way next year, we’ve no doubt Skoda’s success is set to continue.

It’s perhaps surprising to see the most searched for Hyundai only manages eighth in our list, but it’s still a solid showing for the Korean brand. The Hyundai i30 is a rival for the Ford Focus and VW Golf, and offers low running costs, decent practicality and a five-year warranty. It’s a credit to the company that more than 234,000 of you have searched for and read the CarBuyer Hyundai i30 review in the past three years.

The Kia Rio might still sit some way behind the Ford Fiesta and Honda Jazz, but it beats the VW Polo (10th), Hyundai i20 (13th) and SEAT Ibiza (24th) in CarBuyer’s most searched for car reviews. It’s a bargain to buy, costs very little to run and will fit five full-sized adults at a squeeze. Not to mention the fact that it comes with Kia’s industry-leading seven-year warranty.

Creeping into our top 10 most popular reviews is the VW Polo – with nearly 208,000 people searching for our opinion on the Ford Fiesta rival. No matter what your budget, there’s a Volkswagen Polo for everyone – from the basic petrol and diesel models, right through to the eco-friendly Polo Bluemotion and range-topping Polo GTI hot hatch. No surprise to see it on this list, then.

Stay tuned this week for more popular content, including videos, tips and advice and best buys!