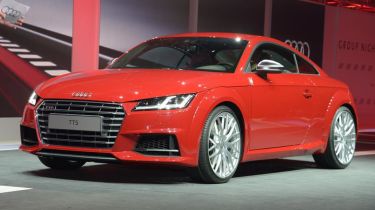 The 2014 Geneva Motor Show offered plenty of exciting and interesting new cars to look at, including some major debuts for some of the world's most important new cars.

There were significant models from Audi, Ford, Volkswagen, BMW, and Mercedes, to name just a few, and Carbuyer's sister site, Auto Express, put together some short videos to give us more details and a closer look at the most interesting cars at the show. Scroll down to enjoy the videos from Geneva.

The new Audi TT isn’t a huge departure from the design of the previous two versions but it’s still striking, with a bigger, more angular grille and stronger lines on the body of the car.

The car is lighter than the outgoing model and the new engine range features a 2.0-litre diesel and 2.0-litre petrol that deliver improved performance and economy. The top-of-the-range TTS model has 306bhp and is faster from 0-62mph than a Porsche Cayman S.

The 2014 Ford Focus made its debut at the Geneva Motor Show, giving the world a first look at the updated design of what is one of the UK’s best-selling cars.

The new engine range will include Ford’s new 1.5-litre petrol EcoBoost engine, which is available with either 148bhp or 178bhp.

The car will be released some time in July this year and will cost roughly the same as the current Focus.

The Volkswagen T-ROC concept was unveiled in Geneva and it’s very likely a production model will be given the go ahead - if it is, the car will be a rival for the Nissan Juke.

While a production version will probably lose some of the styling touches of the concept, like the removable roof, we expect the car be the same size and look very similar.

BMW’s first ever front-wheel drive model, the BMW 2 Series Active Tourer, made its debut in Geneva. The car is based on the same platform used by the new MINI and will also share engines with the iconic hatchback.

The 2 Series AT has 468 litres of boot space and the rear seats slide and recline for extra flexibility, so the car promises to be a practical choice for families. The range will also offer the most economical model in the current BMW line-up – the 218d will do close to 70mpg. You can order the new car now, with first deliveries will starting in September.

The Honda Civic Type-R concept was one of the most dramatic new cars unveiled this week. Its sporty body kit, large rear spoiler and 20-inch alloy wheels give it an aggressive look and we can expect many of the styling touches to be kept on the production Civic Type-R, which is due in 2015.

The car uses a 2.0-litre turbo petrol engine that produces over 276bhp – the production version should use the same engine to keep it in competition with the Volkswagen Golf R and the Ford Focus RS.

Carbuyer’s Mat Watson was impressed with the elegant design of the new Mercedes S-Class coupe when he saw it at the show and it’s not hard to see why. The £100,000 sports car has a striking design and is packed full of hi-tech equipment, as well as a very luxurious interior. Underneath the bonnet is a large 4.7-litre petrol engine that produces 449bhp.

The new Citroen C1, Peugeot 108 and Toyota Aygo are all in essence the same car – it’s up to the buying public to decide which one they like the look of most or which of the three city cars offers the engine and options best for their needs.

The small SUV crossover market is booming at the moment and Jeep is another company looking to tempt customers away from established cars like the Nissan Juke. With that in mind, the company brought the Jeep Renegade to the show in Switzerland

The Renegade is based on the Fiat 500X but has plenty of Jeep styling touches to give it the look of a serious off-roader. Expect the baby Jeep to start at around £15,000.