SEAT el-Born will have around 200bhp and will be based on the Volkswagen ID.3 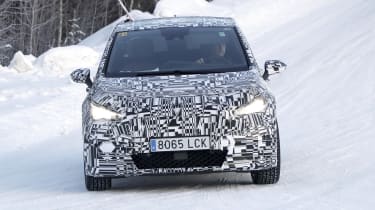 The pure-electric SEAT el-Born has been spotted undergoing winter testing in the Arctic Circle as it nears production. While a camouflage wrap still covers most of the car, it’s now possible to make out more of the car’s design details, like the shape of the headlights, than it was before.

The el-Born will be a spacious five-door hatchback. It’ll share many design elements and parts with the Volkswagen ID.3 hatchback, just like the SEAT Leon shares its underpinnings with the Volkswagen Golf. When the el-Born goes on sale later this year, there will be several electric powertrains available, with the most powerful providing a range of up to 261 miles.

Prices and full specifications will be revealed closer to the car’s launch date but we’re expecting a starting price of around £26,000, which would be a similar figure to a range-topping Leon. The el-Born’s rivals will include the Nissan Leaf, Hyundai Ioniq and the Peugeot e-2008 crossover. 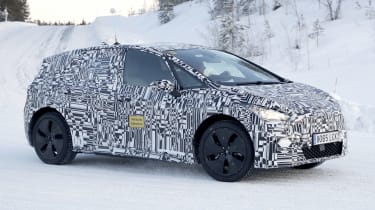 We saw the SEAT el-Born in concept form at the 2019 Geneva Motor Show, and these spy shots suggest that the production model will be faithful to the concept. The car will get sharply styled LED headlights with a large fared-in ‘grille’ design and pointy air intakes on the lower section of the front bumper.

The rear bumper is clean and smooth, although it doesn’t seem to have the sporty bits shown on the el-Born concept in FR spec. It does still have an eye-catching boot spoiler and side skirts, plus aerodynamic alloy wheels. The rear lights seen on the concept car have been redesigned and we expect they’ll be connected by a full-width light bar, just as they are on the SEAT Tarraco SUV and the new Leon. The concept also featured a number of other styling touches, which may be covered on the test car by camouflage.

The new SEAT el-Born will use the same underpinnings as the Volkswagen Golf-sized ID.3 hatchback. Both cars will help form the next wave of electric hatchbacks that offer more range than ever, with the top models offering around 20 more miles of range than the Nissan Leaf e+.

While we haven’t seen the final interior yet, the SEAT el-Born should offer more cabin space than the SEAT Leon hatchback. Volkswagen has previously told us that its ID.3 will offer a similar amount of space to the Volkswagen Passat, which is much bigger inside than the Golf. With the front pillars pushed further forward, the interior should feel large and airy.

It features a large 10-inch infotainment touchscreen, which ‘floats’ on top of the centre console, and a new version of SEAT’s configurable digital dashboard that replaces analogue dials. The concept also featured sporty one-piece seats, which should offer plenty of support through quick corners, but they’re not guaranteed to make production. 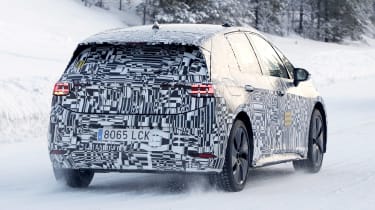 SEAT’s first car designed to be electric from the outset will be powered by a 62kWh battery and an electric motor. The motor produces 201bhp and manages 0-62mph in 7.5 seconds, which should be fast enough for most drivers. A range of 261 miles is confirmed, as is 100kW fast-charging capability for recharging to 80% capacity in just 47 minutes. Less powerful, cheaper versions will also be available, and these will probably join the line-up after the car’s launch.