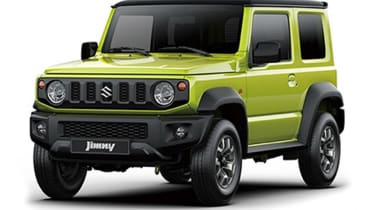 This is the 2019 Suzuki Jimny, the all-new replacement for the long-serving outgoing version of Suzuki’s small and rugged SUV. Prices for the new car have now been confirmed, with the entry level SZ4 model starting from £15,499.

The new Suzuki Jimny SUV continues the tradition of offering genuine off-road performance in a very small package, while also improving its on-road manners to suit everyday driving. It’ll face rivals like the Fiat Panda 4x4 and Jeep Renegade, as well as larger no-frills SUVs like the Dacia Duster.

The new Suzuki Jimny could attract more buyers on looks alone: retro features like round headlights, a slotted grille and squared-off bodywork pay tribute to older Jimny models, as does the spare wheel hung on the tailgate. The overall look is similar to a Mercedes G-Class, albeit much smaller.

The simple, angular and rugged design theme carries on inside. The dashboard is finished with scratch and stain-resistant plastics, while all the major switches and controls are designed to be easily used when off-road or wearing gloves. A central touchscreen brings modern infotainment functionality without detracting from the overtly practical design. 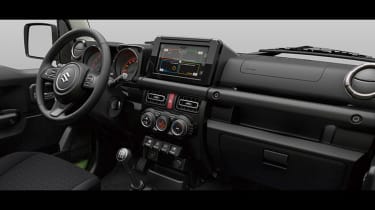 When it comes to space, Suzuki has made the most of the Jimny’s tiny dimensions. The car is a strict four-seater, though the rear seats fold completely flat to expand the boot to a total of 377 litres. In a further nod to practicality, the boot floor and seat backs are covered with plastic, while a number of holes along the boot sides allow for the attachment of hooks and other accessories.

The 2019 Suzuki Jimny has a ladder-frame chassis, rigid axles and selectable four-wheel drive with a low-range gearbox and locking centre differential. These traditional SUV features are not sophisticated by modern standards but should ensure that the new Jimny is as rugged and capable as buyers expect, as do generous approach and departure angles and off-road optimised traction control. 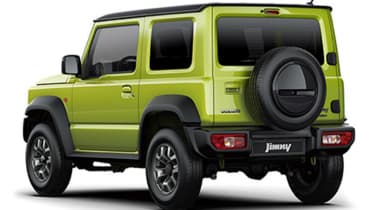 Despite its traditional, no-frills design, the 2019 Suzuki Jimny has been fitted with a suite of modern safety and assistance systems. Automatic emergency braking, lane departure warning, ‘weaving alert’ and high-beam assistance all feature, as does traffic sign recognition – the first time the system has featured on a Suzuki.