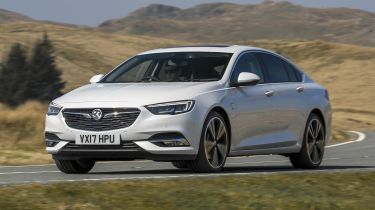 The Vauxhall Insignia Grand Sport hatchback and Sports Tourer estate are now available with a 197bhp turbocharged petrol engine, with prices starting at £25,610.

The new engine fills a gap in the Insignia's line-up of petrols and diesel, slotting in between the 138bhp 1.5-litre and 257bhp 2.0-litre. Vauxhall promises an impressive turn of speed from the new engine, with 0-62mph possible in just 7.2 seconds. This performance is more than a match for rivals, which include the Ford Mondeo, Volkswagen Passat and Peugeot 508, although the Insignia can't match the most powerful Skoda Superb for outright power.

The 1.6-litre petrol engine is claimed to return 44.8mpg, placing it on par with similarly powerful rivals. CO2 emissions of 146g/km are competitive for the class, too, and bring company-car users a 30% Benefit-in-Kind (BiK) tax rate. It's worth noting, too, that its emissions have been measured using the latest "RDE" testing procedure, peformed on public roads in a bid to accurately simulate real-world driving situations. 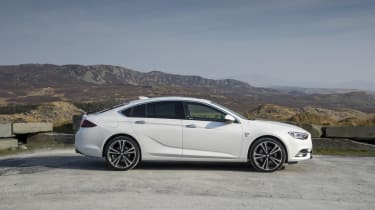 Those who cover more than 12,000 miles a year or so, or who don't need the extra performance of the 1.6-litre turbo petrol, might be better of with one of the diesels – they're claimed to return up to 70.6mpg. The 1.6-litre is only available from the SRi VX-Line Nav trim level and up, so it's far from the cheapest model in the range, but boasts a sporty bodykit, heated steering wheel, sat nav and all-round parking sensors.

The Vauxhall Insignia VX-Line Nav starts at £25,610 when equipped with the 1.6-litre engine.