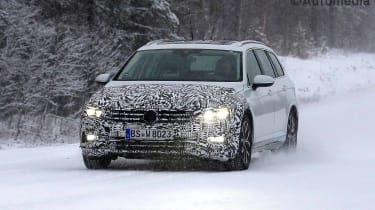 The next Volkswagen Passat is set to arrive early next year – our spy shots give a taste of what to expect from the German manufacturer’s mid-life refresh of its popular family car.

Images have emerged showing the 2019 Passat Estate undergoing tests in cold weather, where it was caught on camera in the company of the updated saloon that we've seen before. Like the saloon, the car's centre section appears little changed, but the front and rear ends have had a substantial redesign to match newer models like the Volkswagen Arteon and Volkswagen T-Roc.

The new look will bring the Passat up to date, ready to renew its competition against the Ford Mondeo, Peugeot 508, Vauxhall Insignia Grand Sport and latest Mazda6. 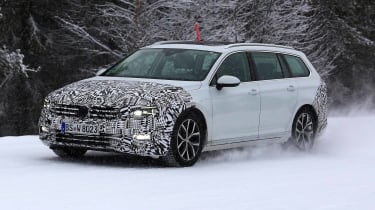 Engine choices for the refreshed Volkswagen Passat are likely to consist of Volkswagen's latest range of petrol and diesel engines, as well as a plug-in hybrid option. This time, though, it'll be offered across the range, rather than being reserved for a standalone GTE model as is currently the case.

The car’s petrol options should include Volkswagen’s latest 1.5-litre engine, as featured in the Volkswagen Golf, Volkswagen T-Roc and other models. Most of the current engine line-up will remain, albeit with changes to improve economy and emissions for both petrol and diesel models. 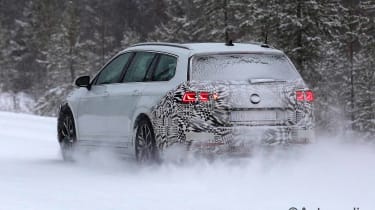 The headline plug-in hybrid powertrain will feature a 1.4-litre petrol engine with 154bhp paired with a 114bhp electric motor; an all-electric range of 44 miles should be possible thanks to a larger battery than the outgoing GTE, helping its CO2 emissions drop to around 30g/km. 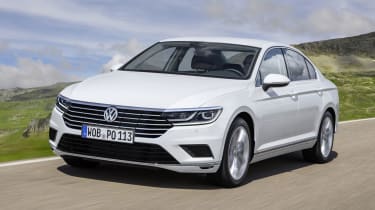 Our exclusive image (above) shows the Passat saloon as it could look, shorn of the monochrome wrap used to disguise the car. It depicts the updated model as an evolution of the current car’s design, which brings it into line with the German brand’s latest models.

Inside, the Passat isn’t likely to change too much – it’s unlikely that Volkswagen will want to step on the toes of its Arteon range-topper, a car that shares much of its interior design with the outgoing Passat. Infotainment will take an obligatory step up, with Volkswagen’s latest 10.5-inch Active Info Display digital dials taking centre stage.

The next Volkswagen Passat will be the first of many new models to arrive in 2019 from the German brand – the next Volkswagen Golf is also set to break cover, along with the T-Cross SUV and VW’s first electric car, the I.D.