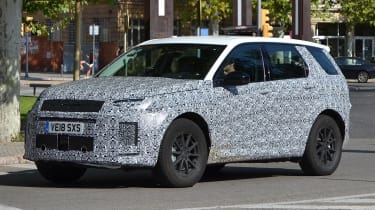 Unlike the Range Rover Evoque, a model that’s due a ground-up overhaul in early 2019, the forthcoming Land Rover Discovery Sport will still be based on the same mechanical underpinnings, albeit with a number of improvements to its technology and engines. Styling will also get an upgrade – although it’s hard to see exactly what this’ll entail due to the development car’s disguise. Minor changes to the car’s headlights, tail-lights, grille and bumpers are expected, along with new alloy wheels.

The new car will get a range of new petrol and diesel engines, but it's not clear whether or not hybrid power will be immediately available. Land Rover has stated that all of its models will be available with hybrid power by 2020, so it's likely that the car’s mechanical underpinnings – which will remain the same as the old car’s – will need upgrading to accept this technology. 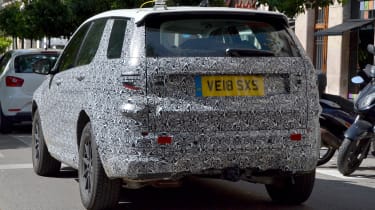 The usual array of technological upgrades is expected, but our spy photographers noted that while a redesigned centre console and new infotainment feature, the new car won’t carry the Pro Duo dual-screen system as seen on the latest Range Rover models like the Velar.