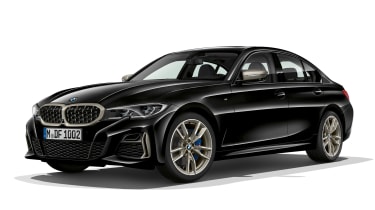 BMW has revealed the new BMW M340i xDrive, the latest version of the all-new 2019 BMW 3 Series. As with M-prefix cars across the BMW range, such as the existing M240i, the M340i is set to offer performance and driving fun in a package that’s not quite as hardcore or expensive as range-topping M-cars. The new car will be aimed squarely at the Audi S4 and Mercedes-AMG C 43 when it goes on sale in July 2019; prices should start at around £49,000.

The BMW M340i will be powered by a newly developed straight-six petrol engine that develops 369bhp. The new car gets an eight-speed automatic gearbox, xDrive four-wheel drive, selectable driving modes, a sports exhaust, retuned suspension, variable-rate steering, a limited-slip differential and upgraded brakes, all of which will help set it apart as the performance model in the new 3 Series lineup.

Claimed performance figures are impressive: 0-62mph takes just 4.4 seconds, and although a top speed has not been confirmed, an electronically limited figure of 155mph is most likely. Claimed average fuel economy sits at just above 37mpg, while CO2 emissions are 172g/km. 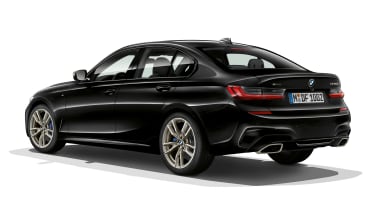 There are a number of sporty touches to the M340i’s exterior, including aerodynamically optimised bumpers and side-skirts, along with a rear spoiler. The new 3 Series grille gets a unique mesh treatment, while ‘Cerium Grey’ mirror caps, front intake elements, exhaust tips and grille surrounds help add a subtle high-performance look. Optional BMW Individual 19-inch lightweight wheels will be available in addition to standard 18-inch alloy wheels.

Inside, the BMW M340i is set apart by its standard sports seats trimmed in unique Alcantara, plus a darker roof lining and a leather-trimmed ‘M’ steering wheel, while the ‘M340i’ model name appears on the car’s digital dials and door sills.