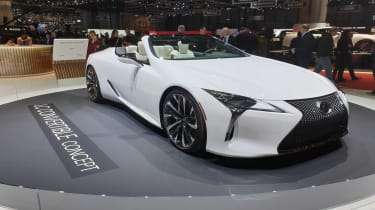 This is the Lexus LC Convertible Concept, a near-production preview of a soft-top version of Lexus’ flagship GT. The concept is set to be shown at this year’s North American International Motor Show in Detroit on 14 January.

The Lexus LC Convertible Concept looks to be very close to production; aside from the lack of a fixed roof, the car is not too far removed from the Lexus LC coupe that’s currently on sale. The addition of a convertible to the range would help Lexus take on rivals like the Mercedes SL and Porsche 911 more directly, both of which already offer top-down motoring.

There are no pictures of the LC Convertible Concept with a roof in place. Previous Lexus convertibles have used folding hard-tops, but the small hatch on the concept’s rear deck suggests a fabric soft-top could be used on a potential production version. This would keep the LC in step with sportier rivals like the new Porsche 911 Cabriolet; a fabric roof keeps weight down to improve handling, performance and efficiency. 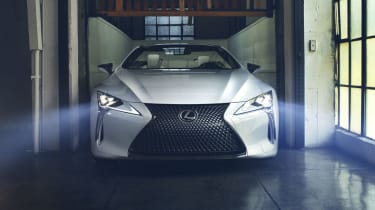 Inside, the LC Convertible Concept sports few changes over the production LC coupe, save for some bright white leather and shiny metal trim.

Tadao Mori, chief designer of the LC Convertible Concept, has hinted at the car making production: “This concept takes the unmistakable design of the LC coupe and reimagines it as a future convertible,” he said.

“A production version of this concept would be exhilarating in many different ways,” Mori suggested. “You would see its dynamic lines as you approach, hear its engine when you start it up and feel everything around you once on the road. It would engage the senses in an exciting way, every time you get behind the wheel”.