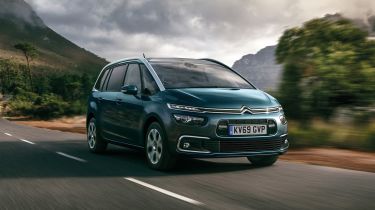 The Citroen Grand C4 SpaceTourer is to get three new trim levels and a higher standard specification as part of a range of 2019 updates. Most buyers go for higher-spec models, so Citroen has responded by introducing three new trims, all of which come with more equipment as standard. The new trim levels can be ordered now, with first deliveries starting from the end of October.

Touch Plus, Feel Plus and Flair Plus replace the previous trim levels, with Touch Plus representing the entry-level model of the Grand C4 SpaceTourer range. Impressively, even this version comes with a 12-inch touchscreen and Citroen’s Connect Nav system with a three-year subscription to live traffic updates. It runs off the same in-built SIM card as the system that automatically alerts the emergency services if you have a collision.

Best people carriers and MPVs to buy this year

Feel Plus is the mid-range spec and adds half-leather seats, a reversing camera and keyless entry and start. Extra safety kit is thrown in, including active safety braking, speed limit recognition and a driver attention alert. 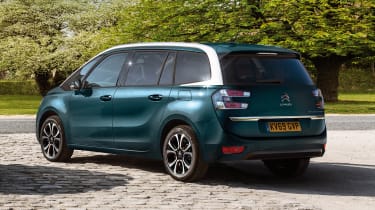 The outgoing top-spec Flair model has racked up half of Grand C4 SpaceTourer sales in 2019, and the new Flair Plus trim that replaces it adds intelligent xenon headlights, lane departure warning and active cruise control.

The updates to the Grand C4 SpaceTourer range also include a new petrol engine, which is compliant with the strict new RDE2 emissions laws that’ll come into force in 2021. It’s a 1.2-litre turbocharged petrol engine with 128bhp, and is mated to an eight-speed automatic gearbox.

Touch Plus starts from £25,935, rising to £27,200 if you choose the 128bhp diesel engine. Prices have risen slightly over the outgoing model but the Citroen Grand C4 SpaceTourer still undercuts most of its rivals, including the SEAT Alhambra, Ford S-MAX and BMW 2 Series Gran Tourer. Feel Plus and Flair Plus start at £28,135 and £30,485 respectively.

Read our guides to the best large MPVs, best seven-seat cars and best cars for under £300 per month to see why the Grand C4 SpaceTourer remains a strong seller.