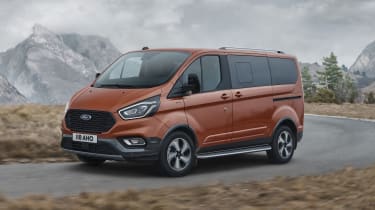 The Ford Tourneo Custom MPV is now available in a tough-looking Active trim level. Like the Ford Fiesta Active and Ford Focus Active, the new trim adds 4x4-like looks but remains two-wheel drive. Starting at £37,950, the Tourneo Custom Active is available to order now, with deliveries starting in late summer.

The Active model is marked out by black plastic body cladding on the wheel arches, side skirts and bumpers. It also gets exclusive 17-inch alloy wheels, raised ground clearance, a new grille, Active badging and roof rails. You don’t get four-wheel drive, but a mechanical limited-slip differential (providing extra traction on loose or slippery surfaces) is available for £550.

Inside, there are a few changes including part-leather seat upholstery and blue instrument cluster accents. Up to eight seats are fitted and most of these can be moved, flipped around or removed entirely to suit the user’s requirements. When the seats are removed, the seat mounting points can support in-car bike racks. 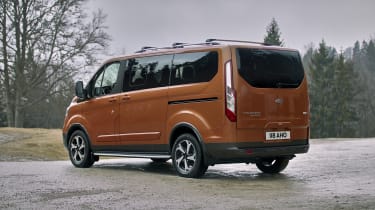 Buyers can choose from several power outputs from a 2.0-litre EcoBlue diesel engine: 128bhp, 168bhp and 182bhp. There are also EcoBlue Hybrid mild-hybrid options, which have a small battery to store energy that would be lost during braking and enable the start-stop system to kick in sooner. Ford claims 36.6mpg and 203g/km for the Tourneo Custom Active.

The Ford Tourneo Custom Active was launched alongside four-wheel-drive Ford Transit Trail and Transit Custom Trail models. These feature off-road tyres, Trail logos and a new grille with oversized ‘Ford’ letters. The company also confirmed that a Ford Tourneo Connect Active would join the range later in the year.

The Tourneo Custom is a van-based MPV and rivals the Peugeot Traveller, Mercedes V-Class and Volkswagen Caravelle.

Read our Ford reviews or check out our guide to FordPass Connect.