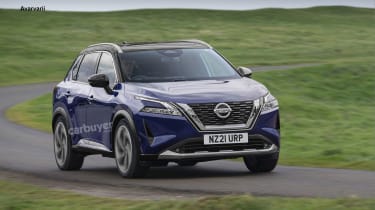 The new Nissan Qashqai will be available with two engines, a petrol with mild-hybrid technology and a full hybrid ‘e-Power’ version. While Nissan has revealed plenty more details about what’ll power the Qashqai, we’re yet to see uncamouflaged images of the next-gen family SUV. It’s set to be revealed in the next few months.

When it goes on sale later on in 2021, the Qashqai will face a huge number of rivals, such as the Kia Sportage, Ford Kuga, Hyundai Tucson and Mazda CX-5 - cars that were all introduced to steal some of the Qashqai’s success. Nissan notes that the car now has 26 main rivals, and it’s looking to put the new Qashqai right back at the top of the class.

From launch, the only available engine will be a 1.3-litre petrol engine. It’s carried over from the current Qashqai but gains mild-hybrid technology, which should slightly lower fuel consumption and emissions. A small battery stores energy usually lost during braking and uses it to assist the petrol engine when accelerating (between 12 and 68mph). Fuel consumption figures have yet to be confirmed but the current car manages around 40mpg. Nissan has confirmed that the new engine produces 4g/km less carbon dioxide than the last-generation Qashqai.

The petrol engine is available with either 138bhp or 156bhp. Both get a six-speed manual gearbox but you can opt for a CVT automatic gearbox and four-wheel drive on the latter. We’re told that both gearboxes have been improved, while updates have also been made to reduce friction and improve turbo response.

The e-Power hybrid drivetrain consists of a large battery and an electric motor that produces similar power to the one in the electric Nissan Leaf, plus a 155bhp 1.5-litre petrol engine. Unlike a normal hybrid, the petrol engine is used as a generator to power the motor, which drives the wheels. It’s said to feel like an electric car in terms of its seamless acceleration, and with 187bhp on tap it should get off the line pretty quickly. Nissan says it ‘accelerates quicker than hybrid rivals’, but plug-in hybrid SUVs will be more efficient. Initial figures suggest it’ll return 53mpg. This engine will be available to buy in 2022.

Full pricing details will be revealed after the car’s UK launch, but it’s likely the new Qashqai will start from around £25,000. Extra on-board technology will probably push the price up compared to the current car, which starts at £23,550. 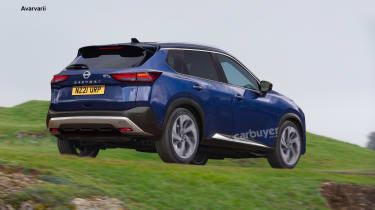 The trim levels are likely to match the current Nissan Juke line-up, with an entry-level Visia spec joined by Acenta, N-Connecta and Tekna trim levels. LED headlights, lane-keeping assistance, cruise control and a reversing camera should all be fitted as standard, while high-spec cars will get self-parking assistance and a premium sound system.

Our exclusive images preview how the car might look when it’s finally revealed. Based on Nissan’s recent pictures of a camouflaged Qashqai prototype, we expect the new car to come with much bolder styling than the last two generations. 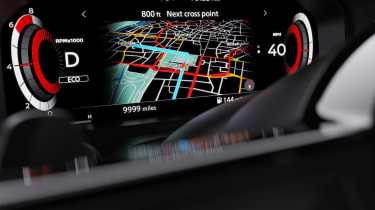 The new Qashqai will come with a thoroughly overhauled cabin. A large, glossy touchscreen now sits at the top of the dashboard, instead of in the middle of the centre console. Rather than a clutter of shortcut buttons around the edges, the new nine-inch infotainment system relies on tiles on the screen - although some useful physical buttons remain underneath.

The climate control panel has been redesigned but we’re pleased to see that it remains a very analogue system with physical buttons. One aspect that has become digital is the 12.3-inch instrument cluster, which boasts relevant driving information as well as sat-nav guidance. Other high-spec kit available includes a Bose sound system, massaging front seats and a large wireless phone charging pad.

There’s still a lot of hard-looking plastic dotted around but we expect the Qashqai’s interior to feel slightly more upmarket thanks to wood-effect trim on the centre console, lots of chrome, and an illuminated strip around the gear lever and the driving mode selector. 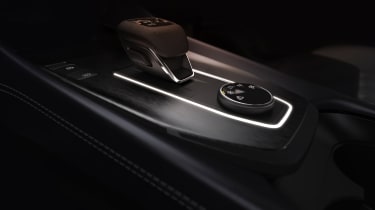 The new Qashqai is 35mm longer and 30mm wider than the last Qashqai, so it’s perhaps unsurprising that practicality has improved. Rear-seat passengers get 22mm more knee room, while both rows benefit from around 15mm extra headroom. Nissan has relocated the cupholders so you’re less likely to knock drinks over when changing gear, and it has kept the last model’s reversible boot floor. Luggage capacity has grown by 74 litres, so its 504-litre space is now competitive with some of the bigger SUVs in the class.

Although the Qashqai test car is still heavily camouflaged, it’s clear that the front end will feature a redesigned V-shaped grille, which will come with chrome on most, if not all, models. This prototype features LED headlights, which we expect to be standard, while hi-tech matrix LED units will be offered on high-spec models. The Qashqai will look more like the Nissan Ariya than the new Nissan Juke, with the headlights and daytime running lights integrated into one connected light cluster. 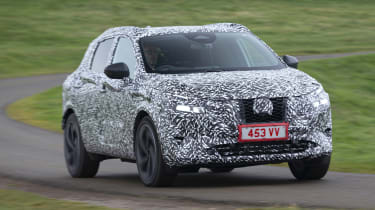 The rear end looks similar in shape to the current model but there’ll be reshaped brake light clusters, a flatter tailgate and a new rear bumper. A two-tone paint scheme may be offered for the first time, giving extra personalisation options, and there’ll be several alloy wheel sizes available. Nissan has confirmed 19- and 20-inch options, and picking the latter means you also get upgraded multi-link rear suspension.

Want to know more about the current Nissan Qashqai? Check out our review, or see how it compares to the best SUVs you can buy right now. 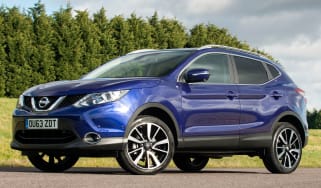 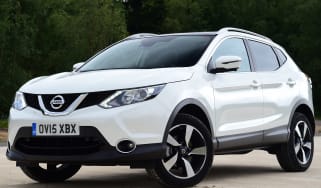