The way the Macan steers, turns and grips is very impressive for an SUV – its four-wheel-drive system is a valuable asset and ensures all its power can be deployed effectively, regardless of the conditions. Even after quite a few years on sale, it remains the benchmark in the SUV class in terms of driving pleasure. The suspension system has been brilliantly designed, the result being that even the entry-level 2.0-litre Porsche Macan is fun to drive - even more so after revisions made as part of a 2018 update.

These include a fine-tuned suspension setup and tweaks to the steering that only serve to increase the Macan's precision and agility. Impressive, too, is the way the Macan somehow offers a ride quality that also ranks among the best in its class. Choosing air suspension means you can lower the Macan's ride height to make it even more composed through corners, although it is an expensive option.

The four-wheel-drive system, together with tough chassis components, make the Macan impressively capable off-road, too – although not quite as accomplished as its Range Rover Evoque rival.

Also present on every Macan is Porsche’s PDK twin-clutch automatic gearbox – manual isn’t an option. This is no bad thing, though: the PDK shifts gears quickly and smoothly, always seeming in tune with your driving.

The Turbo model benefits from Porsche’s PASM adaptive dampers as standard, while they're an option for the GTS. When these are set in Normal mode, the GTS glides serenely along – even more so if the £1,000 air suspension is added and you’re not tempted to take the 21-inch wheel option – the low-profile tyres on these are far less able to absorb small bumps than on the standard 20-inch wheels.

The PASM system also offers a variety of sport modes that let the Macan’s athletic nature come to the surface. The suspension can be firmed up, helping the car to stay on an even keel in corners – allowing it to carry more speed through bends than you would expect. An active exhaust also gives the Macan an evocative engine sound to accompany its pace: by changing the route taken by exhaust gases, it lends the car an appealing, spirited howl. 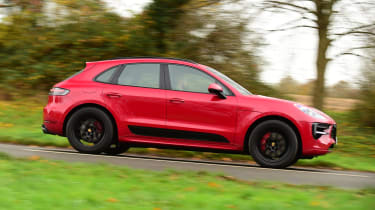 With no diesel engine offered since early 2018, the least expensive, most economical Porsche Macan is now powered by a turbocharged 2.0-litre petrol engine that's used in a diverse range of Volkswagen Group cars, including the Volkswagen Golf GTI, Audi TT and Cupra Ateca, to name but a few. Up to now, you could request this engine in a Macan as a special order, but the majority opted for the diesel instead.

The 242bhp 2.0-litre actually does much to recommend itself, particularly because it weighs far less than the bigger engines, and so the Macan feels even more nimble and agile with it under the bonnet. It's certainly not slow, either, managing 0-62mph in 6.7sec, or 6.5sec with the optional Sports Chrono package.

If your top priority is going quickly, the rather expensive Porsche Macan Turbo at the other end of the range is the one to go for. Its 2.9-litre turbocharged petrol engine produces 434bhp and can take the hefty SUV from 0-62mph in just 4.5 seconds (4.3 seconds with Sport Chrono) and onto a dizzying top speed of 167mph. The Turbo also comes with Porsche's clever PASM suspension system, which sharpens the Macan’s already-sharp handling to a razor edge.

The Macan Turbo has tungsten carbide coated brake discs that are said to offer a faster response, less wear and produce up to 90% less brake dust. They're distinguished by white brake calipers and become an option for other Macan models in the range, while ceramic composite brakes remain an option for the Turbo.

The GTS model returned to the range in early 2020. It remains the quickest Macan in the range bar the Turbo model, and has a lower powered version of the same twin-turbo 2.9-litre V6 petrol engine. It still gives the GTS 375bhp, a 20bhp increase over the 3.0-litre V6 engine in the old car. It’s capable of sprinting from 0-62mph in 4.9 seconds – dropping to 4.7 seconds with the optional Sport Chrono package. These lightning sprint times are helped by the seven-speed PDK gearbox, which boasts tweaked software that makes gearchanges even quicker in Sport+ mode, and even smoother in Normal mode. Acceleration is accompanied by a tuneful sound from the six-cylinder engine that's more exciting than even the more expensive and faster Alfa Romeo Stelvio Quadrifoglio or BMW X3 M can muster.

In the middle of the range, there’s the Macan S, which uses a detuned version of the previous generation GTS’ twin-turbo 3.0-litre V6 to provide a still-impressive 349bhp. Its performance reflects its positioning in the Macan line-up, managing 0-62mph in 5.3 seconds (5.1 seconds with the Sport Chrono Package) and a top speed of 157mph.