The Audi Q3 is agile, powerful and fun to drive

Performance is good across the entire Audi Q3 range, with all models capable of 0-62mph in under 10 seconds. Acceleration figures range between 9.6 seconds for the 148bhp diesel to 7.6 seconds for the 178bhp 2.0-litre petrol model, which has four-wheel drive and Audi’s S tronic automatic gearbox.

While the Q3 resists body lean better than you might expect for a car of its stature, rivals still feel more composed on a twisty road. There's loads of grip – courtesy of the wide tyres fitted to every model – but an enthusiastic driver is likely to derive more pleasure from a BMW X1. 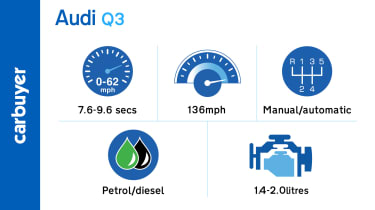 Passengers, meanwhile, might prefer the more soothing ride of a Volvo XC40 – in its quest to strike a compromise between comfort and handling, the Audi misses the target on both. However, the quattro four-wheel-drive system proves its worth when roads get treacherous – it provides a feeling of safety and security on slippery or loose surfaces, as well as a modicum of soft-terrain capability for wet campsites and greasy boat slipways.

The optional adaptive dampers are worth having; they allow you to choose between a firm setting for improved control on twisty roads or a more supple mode for greater comfort. S line cars come with lower, firmer suspension, and when combined with the biggest wheels the ride gets rather stiff. If you’re thinking of choosing this suspension, it’s essential that you test-drive a Q3 fitted with it on a variety of roads to make sure you can put up with it. 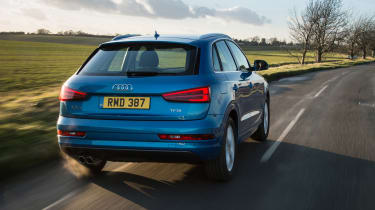 The 181bhp 2.0-litre diesel, which is available with four-wheel drive only, offers a good mix of performance and economy. It’ll do 0-62mph in 7.9 seconds but is still capable of 53.3mpg. What’s more, the Audi 2.0-litre is remarkably quiet for a diesel engine, so this Q3 is good for motorway journeys. Ordering it as an automatic has no effect on performance and actually increases economy to 54.3mpg.

The 1.4-litre turbo petrol is a smooth and powerful engine that rivals the diesel for economy and is definitely worth a test drive, even if it’s the entry-level engine in the Q3 range. Here, 0-62mph takes 9.2 seconds, dropping to 8.9 seconds as an automatic. The 2.0-litre petrol is four-wheel drive and automatic only, and also fast, with a 0-62mph time of 7.6 seconds.

However, the clear standout when it comes to performance is the RS Q3, which makes 335bhp, goes from 0-62mph in 4.8 seconds and produces loads of power at low revs, giving it blistering overtaking ability. Its 2.5-litre five-cylinder engine is only available with the S tronic automatic gearbox. If this isn't quite enough, however, there’s also the Q3 RS Performance version. This tops power up to 362bhp and drops the 0-62mph sprint to 4.4 seconds.

The Q3 is available with either a six-speed manual or Audi’s seven-speed S tronic automatic gearbox, both of which are excellent. Audi’s quattro four-wheel-drive system is also available, but that has been designed for extra traction and grip on bad roads and in wet or wintry conditions, so don’t expect to spend your weekends challenging Land Rover drivers on off-road obstacle courses.