Choosing a BMW means you expect a certain standard of build quality and the BMW X3 shouldn’t leave you disappointed. Reliability has proven to be an X3 hallmark, while overall owner satisfaction is high. A five-star safety rating is about what you’d expect from a car in this price range, while the grippy four-wheel drive fitted to the X3 as standard means it’s less likely to be involved in an accident in the first place. BMW offers a long list of optional extras that can bolster safety still further, but they’re not cheap.

While older cars often slip down the rankings as they age, the X3 came an excellent 24th (out of 200 cars) in our 2015 Driver Power customer satisfaction survey, despite being a five-year-old model. Owner praise the X3’s reliability, ease of driving and practicality, while the main niggles seem to surround running costs and in-car technology, as the X3 is overtaken in this area by newer cars like the Porsche Macan and Jaguar F-Pace. 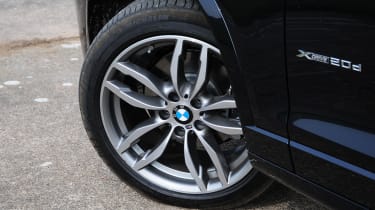 Safety doesn't let the side down – the BMW X3 received the maximum five stars when it was crash-tested by Euro NCAP. It comes as standard with six airbags, electronic stability control and a seatbelt warning reminder.

Boosting safety is easy thanks to BMW’s long options list. You can even save some money by bundling options together as part of a pack. The £1,400 Driver Assistant Plus pack, for example, includes items such as a lane-departure warning system and active cruise control with a stop-and-go function. The latter allows the X3 to match the speed of the car in front – even coming to a standstill if need be – before returning to a preset cruising speed when the road is clear.