The BMW X3 has a starting price of more than £33,000, climbing to more than £45,000, even before you’ve added any options. But prices like that are fairly average for a mid-size SUV with a posh badge on the nose.

It’ll retain a decent amount of that value when you come to sell or trade on, though. Experts say you’ll recoup some 51% of the X3’s list price after three years and 36,000 miles, which matches the resale values of the Audi Q5 and Land Rover Discovery Sport, but is better than the 48% predicted for the Lexus NX. 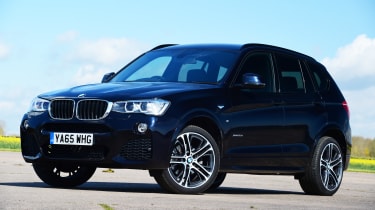 The xDrive20d is the pick of the bunch thanks to its useable performance and decent fuel economy of up to 55.4mpg, while CO2 emissions as low as 135g/km mean you'll pay from £130 a year for road tax if the car is registered before April 2017. Choosing the £1,510 automatic gearbox improves economy to 54.3mpg, while emissions fall to 136g/km, reducing the X3’s road-tax bill to £110 a year.

The fast xDrive30d and even faster xDrive35d can almost return 50mpg if driven carefully, and the latter makes a case for itself when compared to models such as the Porsche Macan Turbo. The BMW falls just a few tenths of a second behind that car’s 4.8-second 0-62mph time, yet it costs about £15,000 less and can travel nearly 20 miles further on every gallon of fuel.

CO2 emissions can vary between models with the same engine, though. An M Sport with bigger alloy wheels emits more than an SE on smaller alloys, so it's worth checking, as you could end up spending more than expected on road tax.

BMW offers two packages that cover the regular maintenance of your BMW X3. The first is called Service Inclusive (£525) and covers the car for five years or 50,000 miles, including MoTs. Replacement parts and labour are part of the deal on everything from the electrics and lighting to the suspension and steering.

Service Inclusive Plus is even more comprehensive and covers wear-and-tear items such as brake discs, pads and wiper blades. It lasts for the same period and costs £1,470.

Insurance ratings for the BMW X3 range from group 30 for the 20d to group 43 for the top-of-the-range 35d. The BMW should cost about the same to insure as the rival Range Rover Evoque, which sits in insurance groups 28 to 43.

The BMW’s warranty is also more generous than what you get with the Range Rover. It covers the car for three years irrespective of mileage, while the Evoque’s cover lasts for a maximum of 60,000 miles.