Not as a reliable as a Volkswagen Golf GTI, but the Ford Focus ST has been closing the gap when it comes to the perception of quality

Owners praise the handling and connectivity, but are less impressed with the ride comfort, exterior styling and practicality, marking down the popular hatchback for its ageing interior and poor build quality. 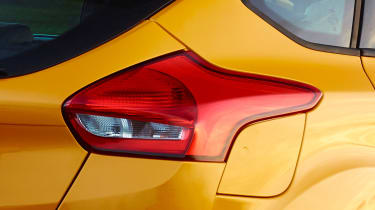 Ford has also been on a big safety push – along with all the major manufacturers – and the Focus earned the maximum five-star rating in Euro NCAP crash tests.

Every ST has front, side and curtain airbags, lane-departure warning and a driver tiredness monitor as standard. An updated automatic braking function operates at speeds up to 31mph, helping to reduce the likelihood or severity of a shunt.

The car’s bright bi-xenon headlights vary their brightness based on steering angle and distance to objects up ahead, while a Cross Traffic Alert system warns you if you’re reversing out of a parking space and another driver is about to cross your path. A new lane-keeping aid automatically nudges you back into your lane if you drift out of it.

The £450 Driver Assistance pack is well priced and makes the ST even safer. It includes the lane-departure warning system, automatic emergency braking and automatically dipping headlights.

If you cover a lot of motorway miles, active cruise control (£250 on the ST-2, standard on the ST-3) is another worthwhile feature. It can match the speed of the car in front before returning to a preset cruising speed – taking some of the strain out of motorway driving and adding another layer of safety.