The standard Ford Focus is one of the best cars to drive in the small family hatchback class, so it must have been an easy decision for Ford to add power and fine-tune the handling to produce the Ford Focus ST. More pace, sharper steering and a firmer suspension has only made the Focus more thrilling from a driver's point of view.

There are certainly quicker cars in the ST's class, like the Renault Megane RS and SEAT Leon Cupra, but they're more expensive and arguably more 'hardcore' than the Focus. Other rivals such as the Volkswagen Golf GTI and Skoda Octavia vRS are both slower than the petrol ST and not as much fun to drive, either.

Two engines are on offer to Focus ST buyers - a 247bhp 2.0-litre EcoBoost petrol engine or a 181bhp 2.0-litre diesel engine. The petrol is much the faster of the two, managing 0-62mph in 6.5 seconds compared to the diesel's time of 8.1 seconds. The trade off is that the diesel is much cheaper to run.

The diesel claims an economy figure of 67mpg and CO2 emissions of 110g/km, resulting in a road tax bill of £140 a year and a 27% Benefit-in-Kind (BiK) rating for company-car buyers. The petrol engine is capable of 41mpg but its CO2 emissions of 154g/km mean the car attracts a 35% BiK rating. While it’s more costly to run than the diesel, the petrol engine is relatively efficient considering how powerful it is. 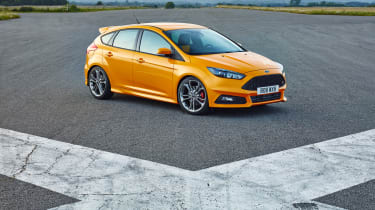 That power will take the petrol model to over 150mph but the car is also very entertaining to drive in corners. It may not be as capable or involving as the Megane and the Leon Cupra but it's more exciting than the Golf GTI, and it also manages to be comfortable and practical for family life at the same time. The ride can feel firm sometimes and the front wheels occasionally lose grip under hard acceleration, but overall the setup is conducive to excellent cornering and confidence-inspiring steering.

In terms of practicality, the Focus ST doesn’t suffer compared to the standard model. You can only get it with five doors, which makes getting people and/or luggage in and out of the back seats easy, while the boot holds the same 316 litres as the standard car, although this is a little bit behind some rivals.

When it was first launched, the Focus ST could be ordered in one of three trim levels: ST1, ST2 and ST3. The ST-1 was dropped due to low take up leaving the ST-2 and ST-3 models. All models include have a bodykit, 18-inch alloy wheels, Recaro seats, sports suspension, DAB radio and Ford's SYNC infotainment system performance. 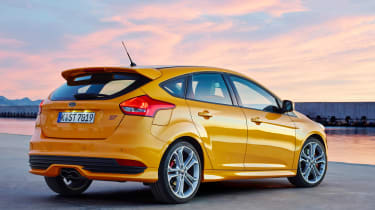 We think the ST2 strikes the best balance between price and equipment, as it includes dual-zone climate control and a fast-demisting windscreen, as well as automatic lights and rain-sensing wipers.

As it’s essentially the same car as the standard Ford Focus, the ST has the same five-star Euro NCAP crash safety rating. It gets all the same safety equipment as the standard hatchback, including tyre-pressure monitoring.

Ford doesn’t have the greatest reputation for reliability, but it finished in 16th place out of 26 manufacturers in our 2018 Driver Power owner satisfaction survey.