The Ford Focus ST sounds good and goes great, irrespective of whether you choose the petrol or diesel model

The Ford Focus ST pairs powerful engines with precise and responsive handling that’s among the best in the class. The car also comes with torque vectoring technology that makes it even faster and more stable in corners.

The Focus’ sports suspension reins in body lean so the car’s momentum is easy to control through a series of quick corners and the body stays flat. It’s also been designed to reduce torque steer – the steering-wheel-tugging sensation that can afflict powerful front-wheel-drive cars under acceleration.

Unlike the Volkswagen Golf GTI and the Renault Megane Renaultsport, the Ford has electric power steering, so it doesn’t feel as natural as its competitors. The Focus ST comes with a six-speed manual gearbox, which makes for easy gearshifts, but if you prefer you can specify a six-speed dual-clutch automated manual Powershift transmission which can be paired with the 2.0-litre diesel engine. 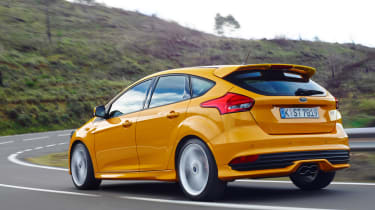 Packed with your family and their luggage, the Focus makes for an effortless cruiser and the engine noise that’s deliberately accentuated under hard acceleration settles down at a cruise. The Focus is much easier to live with in this respect than the Megane Renaultsport, which has a noisy interior that could get wearing on a long journey. The only downside to the Ford is a ride that some may find a bit too firm at low speeds, but it’s streets ahead of the harsh ride quality offered by the Renault.

For drivers looking for a more focussed experience, Ford Performance offers a range of go-faster parts, including coilover suspension manually-adjustable through 16 stages and lightweight alloy wheels.

The Focus ST has a 2.0-litre turbocharged petrol engine, which produces a hefty 247bhp to take the ST from 0-62mph in just 6.5 seconds. Because of the power on offer, the petrol engine settles down quickly at motorway speeds, so is surprisingly quiet, while fast overtakes are just a prod of the accelerator pedal away.

That said, like most turbocharged engines, there’s a slight lag between pressing the accelerator and the car gaining speed. If you want to exploit the power better, it’s best to leave it in a lower gear than usual so the engine works that little bit harder.

To ensure the latest ST sounds as good as the old five-cylinder model, Ford pipes some of the engine noise into the passenger compartment. This delivers a racy, growling soundtrack that will no doubt please fast-Ford enthusiasts. 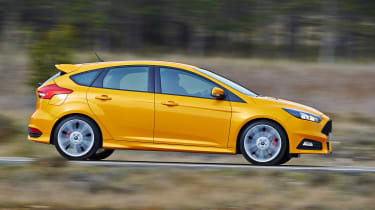 If you want more performance, you can get a Ford-approved tuning pack from specialist company Mountune. It costs around £1,200, boosts power to 272bhp, can be fitted by your dealer and doesn’t affect the car’s warranty. It cuts the car's 0-62mph time to just 5.7 seconds and improves acceleration through the gears too. Although we found that the extra power can upset the car’s handling if you drive it aggressively, it boosts the engine note and you can hear the turbo chattering away which is endlessly entertaining.

Don’t think that by choosing the diesel ST you’re picking the poor relation. It might be 1.6 seconds slower than the petrol from 0-62mph, taking 8.1 seconds, but it closes the gap when it comes to acceleration from 31-61mph, where it’s only 1.4 seconds slower. The automatic Powershift diesel is faster than the manual, posting a 0-62mph time of 7.7 seconds.

That underlines the ST diesel’s searing performance when driving hard through the gears, and is a more useful measure of a car’s real-world performance. In fact, on a winding lane, you can pretty much leave the car in third gear and still drive very quickly indeed.

The diesel uses a synthesiser to pump engine noise into the passenger compartment. The result is a sound that’s far more sporty than you’d expect.