It costs more than a standard model to buy, but the Ford Focus ST shouldn’t break the bank for running costs - particularly if you choose the diesel

The Ford Focus ST is more appealing to the cost-conscious buyer now that there’s a diesel version in the range. That combines the best of the petrol-powered car’s sporty character with vastly reduced bills.

As the performance version of the Focus, the petrol-engined Ford Focus ST has fairly high running costs, although that’s hardly surprising given the power that's available. This model is nowhere near as thirsty as the old ST, though: it's capable of returning fuel economy of 41.5mpg and CO2 emissions of 159g/km. 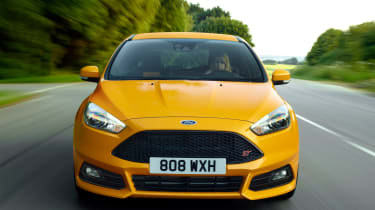 Those figures compare favourably to the Renaultsport Megane, which manages just 37.7mpg and has CO2 emissions of 174g/km. But the Volkswagen Golf GTI moves significantly in the other direction. It can return 47.1mpg and CO2 emissions of 139g/km. It’s less powerful compared to the other two cars, though.

But if you're more concerned with running costs than outright performance, then the diesel is the hands-down winner. It has CO2 emissions of 110g/km and Ford says more than 67mpg is possible. It even makes sense as a company car.

If you have a decent no-claims bonus, then the Focus ST shouldn’t cost too much to insure, but it’ll cost significantly more than the regular car. Ford Focus ST petrol models sit in groups 34 to 36, but diesel models are in groups as low as 24.

Keeping your Focus ST well maintained should be easy thanks to the company’s huge dealer network and affordable servicing costs. Ford’s Protect Premium plan lets you make a one-off payment for servicing your new Focus. Prices start at £390 for two services and £690 for three – the latter including one major service.