The Honda CR-V's driving experience can't quite match the best in class. Honda has designed it with practicality and comfort in mind, but the downside is there’s not much fun to be had in corners. There’s lots of grip, but the inside front wheel has a tendency to spin if you accelerate while going through a corner, which can dent your confidence in the car.

The two-wheel-drive version feels more nimble and agile on the road. In comparison, the steering of the four-wheel-drive versions feels slow-acting and numb, and the body leans heavily in corners. The nine-speed automatic gearbox isn’t the quickest to respond, either – it almost feels like nine gears is too many for it to choose from.

If you're looking for something soft and comfortable, more basic models in the CR-V range will oblige. However, going for the larger alloy wheels (with their low-profile tyres) can lead to a bumpy ride as well as increased road noise. If you're looking for a more engaging drive, the Mazda CX-5 is sharper and more responsive.

Of the three engines available, we’d recommend the 118bhp 1.6-litre diesel. It’s relatively quiet on start-up and remains hushed as speeds rise. Despite being the least powerful engine in the range, this entry-level diesel can still get the CR-V from 0-62mph in 11.2 seconds, but it isn’t as flexible as rivals, so you have to change gear often to keep up progress. Fortunately, the slick-shifting six-speed manual gearbox is a pleasure to use. 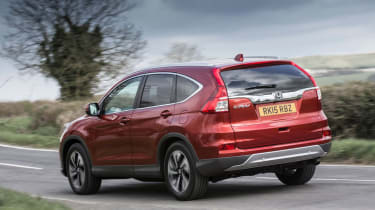 The more powerful diesel engine is much the same as the lesser version, but offers extra performance at the expense of some fuel economy, going from 0-62mph in just 9.6 seconds. The nine-speed automatic available with the more powerful diesel is smooth, if a little slow to respond. Both are at their best cruising on the motorway.

Despite it being a smooth runner and quieter than both the diesels, the petrol-powered CR-V is hard to recommend due to its high running costs. With 0-62mph taking 10 seconds with front-wheel drive, it’s quicker than the entry-level diesel flat-out, but it’s also less punchy in traffic, so it doesn’t always feel faster.