“The Honda CR-V is a spacious SUV that’s reliable and comfortable, but isn’t quite as desirable as some rivals”

The Honda CR-V was well ahead of today's trend for compact SUVs when it first appeared over twenty years ago. Along with its Toyota RAV 4 rival, it demonstrated that not all 4x4s had to be heavy, bulky and costly to run.

With their economical engines and adventurous looks, compact SUVs have become hot property, to the extent that buyers are fast abandoning conventional saloons and hatchbacks in favour of fashionable machines like the CR-V. And there are plenty to choose from, too – the Skoda Kodiaq, Volkswagen Tiguan, Nissan Qashqai, Renault Kadjar, Kia Sportage and Ford Kuga each offer a similar blend of high style, low running costs, compact dimensions and big practicality.

Most can be chosen with front-wheel drive for better fuel-efficiency, and this is the case with the CR-V, which only has four-wheel drive if you splash out on the top versions. Two-wheel drive certainly doesn’t harm the CR-V’s appeal, with more customers likely to benefit from its cost savings than be put off by its lessened off-road ability. In a similar vein, its suspension has been tuned to respond like a car on the road, rather than have to soak up ruts and rocks.

Its low running costs combine well with a practical interior, clearly designed with families in mind, which make it plain to see why the CR-V has remained popular. Inside, the Honda feels very roomy, with lots of space for passengers and rear seats that can be folded almost completely flat. Even without doing this, the 589-litre boot is very large, but stow the seats and luggage room increases to give the CR-V more room than any rival. 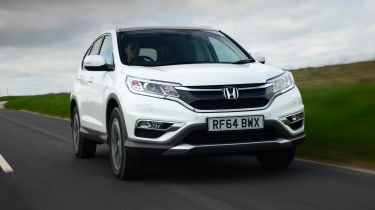 There are four trim levels to choose from, starting with S and working up to EX. All are well equipped, with Bluetooth, climate control, DAB radio, alloys and cruise control as standard. We think SE Plus is the best all-rounder, because it adds a seven-inch infotainment screen, a reversing camera, automatic lights and wipers and front foglights. If you choose the EX model, the CR-V comes with leather upholstery and a large (fixed) panoramic sunroof, but its price takes it into direct competition with the upmarket Mercedes GLA.

There are only three engines on offer, starting with a 2.0-litre petrol offering 153bhp. In the UK, lower fuel consumption makes the 1.6-litre diesel popular, with either 118bhp and front-wheel drive or 158bhp and four-wheel drive. The former can return up to 64.2mpg and is also rewarding to drive, with a smooth power delivery, making it our top pick. It offers the best blend of performance and an affordable price and running costs.

The CR-V is fitted with a slick six-speed manual gearbox as standard, but there’s also an optional nine-speed automatic. This changes gears smoothly and doesn’t have a ruinous effect on running costs. Whatever engine and gearbox combination you choose, the CR-V is refined and smooth to drive; it’s not quite as much fun as the Mazda CX-5, but it handles well for a bulky, compact SUV. 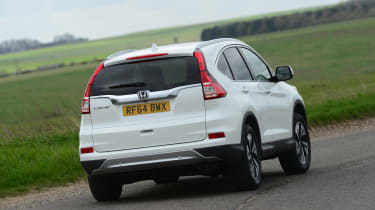 Honda has a tradition of building safe cars and the CR-V is no exception, scoring the full five stars in Euro NCAP crash-tests. This was partly thanks to standard autonomous emergency braking, while you can also make the CR-V safer with a ‘Driver Assistance Safety Pack’ – a suite of technology able to warn of vehicles as you reverse out of a parking space, keep you in your lane, alert you to traffic in your blind spot, recognise road signs, warn of potential collisions and even control the headlight high beam. Another useful option is adaptive cruise control, which uses radar in the grille to match the speed of vehicles ahead on the motorway.

The Honda CR-V finished 26th out of the 75 cars ranked in our 2017 Driver Power owner satisfaction survey of cars currently on sale in the UK. This car is a strong all-rounder that’s sure to go down well with families, thanks to its practicality, economy, safety and dependability.