Honda has garnered a superb reputation for build quality and reliability that’s a match for anything upmarket German brands such as BMW or Mercedes can offer. The CR-V’s interior might not have the same classy appeal as those models, but it oozes quality and feels very solid throughout.

The Honda CR-V was rated highly for reliability in our 2017 Driver Power owner satisfaction survey of cars currently on sale in the UK. Of the owners who responded, 11.3% reported experiencing a problem with their car at least once in the first year. In these cases, a problem with the engine was the most common issue. 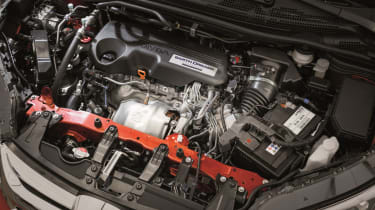 The Honda CR-V has traditionally been sold on safety, so it comes as no surprise that it earned a full five stars in independent Euro NCAP testing. It was helped by features such as autonomous emergency braking, which is fitted as standard.

Additional safety is available, with a 'Driver Assistance Safety Pack' being optional. It includes a collision-warning system that also warns you of traffic crossing behind you when reversing.

The extra grip of the four-wheel-drive models provides further reassurance and Honda offers some excellent optional safety features, including its advanced SENSING driver-assistance system for the top-spec EX model. This adds automatic emergency braking, lane-keeping assistance and active cruise control. The latter two items combine to match the speed of the car in front and keep you from drifting out of your lane on the motorway.