The Honda CR-V’s SUV body gives you plenty of interior headroom and there’s lots of legroom in the back, too. The boxy shape pays dividends in the boot, which is not only big, but also well shaped and has a massive opening. The four-wheel-drive CR-V fitted with the more powerful diesel engine makes for a very capable tow car if you regularly pull a caravan, horsebox or other large trailer.

Plenty of interior space allows the Honda CR-V to comfortably fit five people. Legroom in the back seats is excellent and the flat floor means there’s no transmission tunnel getting in the way of the middle-seat passenger’s feet. They also get a flat seat to sit on, which is much more comfortable than the raised middle seats found in some rivals. As you’d expect, there’s plenty of room up front even for tall adults. 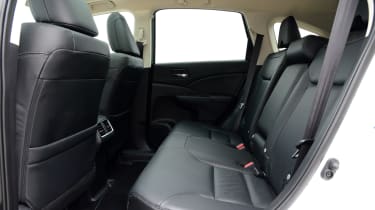 Honda has been generous with storage space: the CR-V has a large bin between the two front seats and three cup-holders in the centre console. The huge glovebox easily swallows large bottles and the front door boasts not one but two pockets. The optional panoramic sunroof floods the interior with light and is one of the best reasons to choose the EX trim level.

Pop open the back of the CR-V and you’re greeted by a class-leading boot that’s both large and well shaped. The huge opening makes loading large or heavy items easy and an almost-flat lip helps, too. Luggage capacity is 589 litres and the boot is also much taller than what you get in a regular family hatchback or saloon. 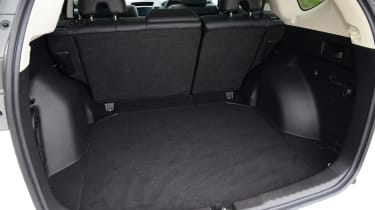 The rear seats can split 60:40 and folding them down flat frees up a maximum load capacity of 1,669 litres. The clever bit is how easy the seats are to fold: Honda’s Magic Seats allow the entire rear bench to fold flat with one pull of a lever at either side of the boot. This is located at the side of the boot space when the seats are down, or under the seat squab when the seat is raised. EX cars also come with a powered tailgate that can be open and closed remotely – although it is a little slow to operate.

How accomplished a tow car your CR-V is depends on what model you go for. With a limit of 1,500kg, CR-Vs with an automatic gearbox are the poorest performers. Go for the 1.6-litre diesel with a manual gearbox plus four-wheel drive and maximum towing capacity rises by 500kg.