The Kia Rio’s diesel engines are highly economical, but they’re not exactly punchy. Overtaking requires plenty of forward planning. The petrol engines feel crisper and more responsive. The Rio’s suspension is firm, making the car feel stable in corners. Only the steering, which is vague and imprecise, lets it down.

There are two petrol engines: an 83bhp 1.25-litre good for 0-62mph in 12.9 seconds and a top speed of 104mph, plus a 107bhp 1.4-litre (11.0 seconds and 114mph). The latter is the only engine to be offered with an optional four-speed automatic gearbox. The 1.25-litre compares well with the Ford Fiesta 1.25-litre, which does 0-62mph in 13.3 seconds, and the Renault Clio 1.2-litre 16v, which takes 14.5 seconds to do the same. For better performance from a small petrol engine, you’ll have to look at the new generation of small, three-cylinder turbocharged petrols from Ford and Renault. 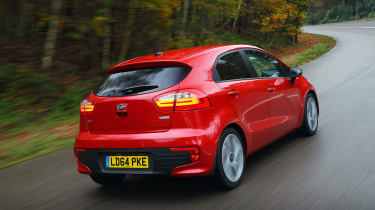 For longer journeys and heavier loads, the Rio’s 107bhp 1.4-litre engine is the one to choose. Whether you go for the 1.25 or 1.4-litre petrol engines, their modest performance suits the Rio, especially around town where the car feels agile and responsive.

All Kia Rio diesel engines come with stop-start technology. The 1.1-litre diesel engine’s impressive fuel consumption comes at a price, with 0-62mph taking a leisurely 16.1 seconds on the way to a top speed of just 99mph. Underwhelming performance like this means you’ll have to plan overtakes well in advance. Undemanding drivers might consider this a price worth paying for the model’s rock-bottom running costs, however.

The 89bhp 1.4-litre CRDi is only slightly more powerful, with 0-62mph taking 13.4 seconds. This is only fractionally slower than the Ford Fiesta 1.5-litre TDCi but almost two seconds slower than the Renault Clio 1.4-lite dCi. However, once the car is rolling, the Rio’s diesel engines can cruise steadily all day long.

They are much noisier than the petrol engines, however, even at a standstill, when they vibrate too much. Yet the petrol engines can be a little boomy, too. Nonetheless, all versions cruise quietly, and as the Rio is comparatively large for a supermini, there’s little of the wind noise and buffeting that can affect smaller rivals on the motorway. The Rio’s firm suspension keeps body lean in check but is too easily unsettled by potholes.