There’s plenty of room for people in the front and rear of the Kia Rio, but this has come at the expense of boot space

The Kia Rio is one of the largest superminis you can buy. Its wheelbase (the distance between the front and rear wheels) has increased by 70mm over the previous model, while it’s also 70mm longer than the best-seller in the class, the Ford Fiesta. This means there’s plenty of room for people in the front and rear of the car, but this has come at the expense of boot space.

Few people will buy a Kia Rio with towing duties in mind, but the larger petrol and diesel versions will happily pull a loaded trailer. A tight turning circle makes manoeuvring and getting into and out of cramped parking spaces easier.

The Kia Rio is a roomy car. The wheelbase of the five-door version is 81mm longer than the Ford Fiesta’s, and an impressive 100mm longer than the VW Polo’s. As a result, there’s plenty of head and legroom for four passengers, or five for shorter journeys. The five-door model’s additional doors mean it’s far easier to get into the back of the car than the three-door version. It’s likely to be more sought-after by used-car buyers for that reason. There’s ample oddment storage, from the cup-holders and cubbyhole in the centre console, to the deep, though only reasonably sized, door bins and the large glovebox. 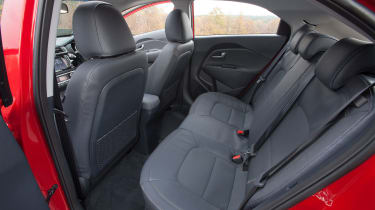 Visibility isn’t the best; thick windscreen pillars create a blind spot, and the shallow rear screen, which is placed quite high, can make reversing difficult. 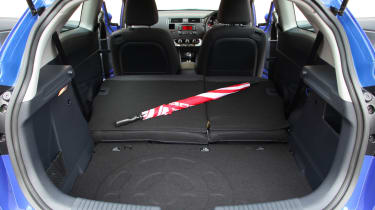 The Kia Rio has a large cabin, but its boot is no bigger than average. The Ford Fiesta’s is far more spacious, with a seats-down capacity of 974 litres compared to the Rio’s 923. Seats up, the Rio’s 288 litres of boot space seriously lags behind the Honda Jazz’s 399 litres. The Rio’s case isn’t helped by the boot’s high lip and the fact that the rear seats form a step when folded – both of which make sliding long and heavy objects into the car an awkward job.

Being a small and lightweight car, the Kia Rio isn’t a serious load-lugger. Maximum braked trailer weights range from 800kg to 1,100kg. The latter equates to a lightweight caravan before it’s been loaded, so the Rio is probably more suitable for light towing – something like a garden trailer or trailer tent.