"The Kia Rio is a stylish supermini that’s affordable, practical and comes with a long seven-year warranty"

Since its launch, the Kia Rio has been a very sensible supermini choice, thanks to its practical interior, economical engines and long seven-year warranty. Buyers don’t have an easy decision, though, with many impressive rivals in the shape of the Skoda Fabia, Vauxhall Corsa, Ford Fiesta and Volkswagen Polo.

Some of them shine more brightly in certain areas – the Fiesta is more fun to drive and the Polo has a better interior – but the Rio is a competent all-rounder. It’s worth noting, however, that an all-new Rio was announced at the 2016 Paris Motor Show with a new design, some new engines and updated technology, so you might want to wait until spring 2017 if you want the latest Rio. The current model is still a good bet, though – especially if you find a good deal – as it’s available with three or five doors and comes with Kia’s seven-year/100,000-mile warranty. 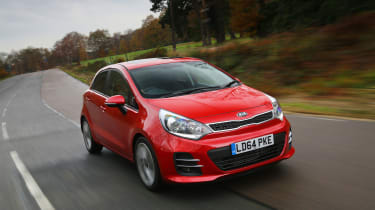 Four engines are available; two petrol and two diesel. The entry-level model is a 1.25-litre petrol with 83bhp, which needs flogging to extract much performance and lags behind engines in rivals, such as the more advanced three-cylinder turbo EcoBoost in the Ford Fiesta.

The 1.4-litre petrol is the most powerful Rio, with 107bhp, but it still takes just over 11 seconds to get from 0-62mph, so it’s fine in traffic, if hardly a quick car. Efficiency is reasonable, though, with up to 56.5mpg economy and CO2 emissions of 114g/km meaning this version will cost £30 in road tax if registered before April 2017.

If you need to squeeze every mile from each tank, the 1.1-litre diesel has claimed economy of up to 85.6mpg and CO2 emissions of 94g/km, making it free to tax under current rates. On the flipside, this engine is unrefined and almost unacceptably slow, taking 16.1 seconds to reach 62mph, making it hard to suggest. The 1.4-litre diesel is a better all-rounder that can still achieve 74mpg, and while it still isn’t exactly fast, it has a more palatable 13.4-second 0-62mph time.

Take to the road and the Rio has little body lean in corners, but this is partly because it has quite firm suspension, so can thump into potholes and shimmy over rough surfaces more than you’d expect. Despite this, the Rio has oddly inert steering, with less communication than you get in a Fiesta, so it’s ultimately less rewarding to drive. The Rio is quite adept at longer motorway drives, though, with less intrusive wind and tyre noise than some rivals.

The entry-level 1 trim is reasonably equipped, getting DAB radio, Bluetooth and air-conditioning, as long as you choose the 1 Air version. We recommend the 2 trim for most buyers, with alloy wheels, leather touches around the cabin and all-round electric windows. 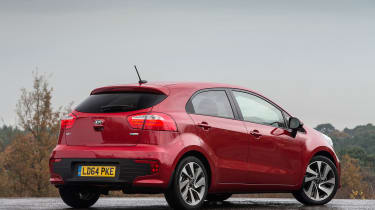 In our 2016 Driver Power customer satisfaction survey, the Kia Rio came 71st out of 150 models, which is a reasonable performance. Most reassuring is its impressive 22nd position for reliability, which helped pull up its overall score, while owners were less pleased with performance (129th) and ride comfort (125th).

Safety is deserving of praise too, with the full five stars from independent crash-test body Euro NCAP, while the Rio’s seven-year/100,000-mile warranty is over double what manufacturers including Ford and Volkswagen offer.