The Kia Rio benefits from insurance groups as low as two for the 1.25-litre petrol engine, rising to seven for the 1.4 petrol and diesel models

Small, frugal petrol and diesel engines, with transmissions geared to reduce consumption further still, make the Kia Rio a very economical car. It falls into insurance groups one to eight, so will be cheap to cover. On top of that, it comes with a seven-year/100,000-mile warranty for peace of mind.

The most economical Kia Rio is the diesel 1.1-litre CRDi 1 model, available only with five doors. It returns almost 78.5mpg in basic Rio 1 form and has CO2 emissions of 94g/km, putting it just behind the Renault Clio Eco. That's low enough to escape road tax at current rates, but not the London Congestion Charge.

The 1.1-litre CRDi 1 Air and 2 versions are slightly less efficient, but still avoid road tax if registered before April 2017. For this reason, their better equipment could make them better to own than the basic 1. The most powerful diesel is the (easier to live with) 1.4-litre CRDi, which returns 74.3mpg and emits 98g/km of CO2. 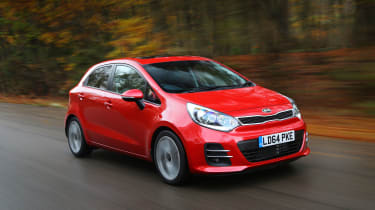 Lower-mileage drivers not so concerned with fuel consumption should consider the Kia Rio 1.25-litre petrol. It returns 56.5mpg and emits 115g/km CO2, which is marginally better than the Ford Fiesta 1.25-litre. However, neither comes close to the Ford Fiesta 1.0-litre EcoBoost petrol's 65.7mpg economy and 99g/km CO2 emissions. The addition of stop-start to the Rio's 1.4-litre petrol brought its economy and CO2 figures in line with the smaller 1.25-litre engine.

Thanks to the Kia Rio’s small diesel engines, insurance ratings begin as low as group one for the 1.1-litre diesel, rising to group seven for the 1.4-litre petrol and diesel models. This means that, for the average driver, the Rio is an inexpensive car to insure. The VW Polo is competitive with the Rio, but by and large the Ford Fiesta sits in higher groups, as does the Renault Clio.

The Kia Rio’s warranty is one of the best in the business and covers the car for seven years or 100,000 miles. The first three years come with unlimited mileage cover, while years four to seven are restricted to 100,000 miles. This means a driver who does 25,000 miles a year during years one to three would have only 25,000 miles of cover remaining for the next four years.