While not as practical as larger models in the range, the Range Rover Evoque has a spacious interior and admirable off-road ability

The five-door Evoque has a more spacious interior than the three-door Coupe thanks to its upright styling, while its boot is also slightly bigger than the three-door's. Yet even the Coupe's boot is reasonably large and well shaped. Choosing a four-wheel-drive model boosts both the Evoque's towing and off-road ability. 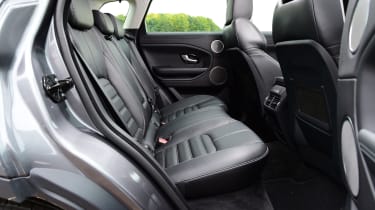 The first decision you have to make when buying a Range Rover Evoque is whether to go for a three or five-door model. The three-door Coupe looks better, but there's very little in it, so if practicality is a priority, the five-door is the one to go for. It’s 40mm higher than the Coupe, which means more headroom in the back seat, as well as slightly more rear legroom. Space up front is decent, too, and Land Rover hasn’t scrimped on storage room. The Evoque has door bins that can hold a large water bottle, a big lidded cubbyhole in the centre console and several cup-holders. 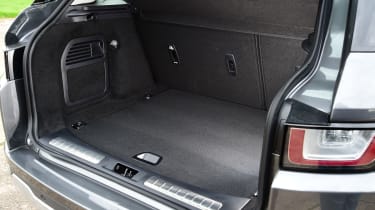 Range Rover quotes a figure of 575 litres for the Evoque’s boot (550 litres for the three-door model), but be aware that this figure assumes you’ll load it all the way to the roof. Measured to the rear parcel shelf (which is how most other manufacturers gauge carrying capacity), the boot’s volume is still reasonable, at 420 litres. All Evoques have a well shaped load area with a large opening and rear seats that fold almost completely flat. Put all the seats down and the five-door Evoque has a maximum capacity of 1,445 litres, while the three-door car offers 1,350 litres. 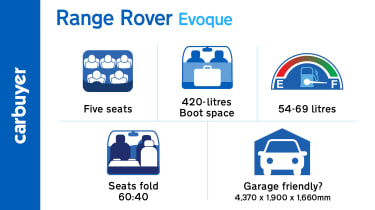 If you’re buying the Evoque for towing, the four-wheel-drive model with the more powerful diesel engine and an automatic gearbox can pull a maximum of 2,000kg. The more powerful manual diesel and automatic petrol can both manage 1,800kg, while the limit for the basic two-wheel-drive car is 1,500kg.