Compared to the rest of the models in the brand’s line-up, the Range Rover Evoque is relatively small and feels more like a conventional car to drive. For the best driving experience, you'll need the Adaptive Dynamics system (an £800 option on HSE Dynamic, HSE Dynamic Lux and Autobiography models). This clever technology makes the Evoque even more composed in corners, but not at the expense of comfort. 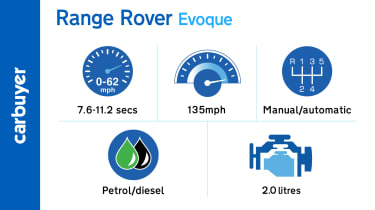 With a 0-62mph time of 10.6 seconds, the least powerful diesel Evoque can require patience. The 178bhp version completes the same in 9.5 seconds, or just 8.5 in automatic form (although the five-door takes 9.7 seconds). If you're not in a great rush to get away from the lights, though, you'll find even the least powerful diesel has enough power for overtaking safely.

With 0-60mph possible in just 6.9 seconds, the 237bhp diesel engine makes for a very fast SUV, but you pay quite a penalty in increased fuel consumption. It’s fitted with two turbochargers and responds very keenly, even from low revs, making it impressive on faster roads. It’s less of a success around town, though, because the extra power of the engine exposes some weaknesses in the nine-speed automatic gearbox, which can struggle to choose the right gear and then engage with a jolt. 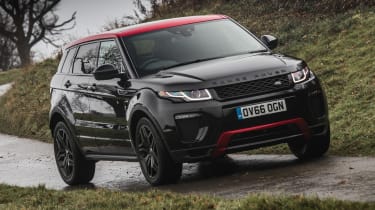 The fastest model is the 286bhp 2.0-litre petrol, which goes from 0-62mph in just 6.0 seconds, but you need to work it quite hard to get that performance.

Both petrol engines (and the most expensive diesel) come as standard with a smooth-shifting nine-speed automatic gearbox, which suits its luxurious nature and will make the car more appealing to used buyers. It’s been setup to provide decent fuel economy rather than lightning-quick gear changes and acceleration.

Although most owners will never need it, the four-wheel-drive Range Rover Evoque has decent off-road ability. All models (even the two-wheel drive) come with Land Rover’s Terrain Response system, which allows you to set up the car for a variety of conditions such as mud, gravel and snow.