The Range Rover Evoque is very safe, but hasn't scored well for reliability

Land Rover has never had a problem making its products look classy and well built, but customers have often reported reliability issues in the long term. Safety standards are good, though - the Evoque comes with a long list of equipment that helped it score full marks when it was crash-tested by Euro NCAP.

The Range Rover Evoque was rated poorly for reliability in our 2017 Driver Power owner satisfaction survey of cars currently on sale in the UK. Of the owners who responded, 23.7% reported experiencing a problem with their car at least once. The most common complaint was related to the electrics.

Surprisingly for such a stylish model, owners mark down the exterior, largely because of fit and finish issues. Other problems include practicality and interior build quality, while performance, handling and safety are more highly regarded. 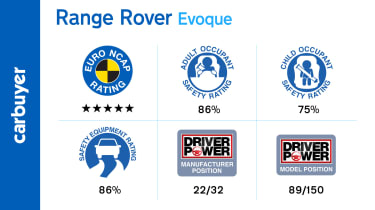 Safety is excellent and the Evoque received the maximum five-star rating from Euro NCAP when it was crash-tested. However, it was evaluated in 2011 and the test has been made even more stringent since then, so newer models such as the Mercedes GLA have had to meet tougher standards to get their five stars.

Nonetheless, the Evoque comes with a host of airbags, electronic stability control and seatbelt pre-tensioners, and there are numerous options to choose from if you want to make the car even safer. These include a road-sign camera that displays roadside warnings on the dashboard and Land Rover's lane-keeping assistance system.