The two-wheel-drive Range Rover Evoque should be able to achieve fuel economy of more than 60mpg, although choosing this model means greatly reduced off-road ability. The petrol is the most expensive to run (and for this reason we don't recommend it) but even its running costs are affordable by Range Rover standards.

Fuel economy and CO2 emissions for the Evoque differ slightly depending on whether you go for the three-door Coupe or the slightly heavier five-door version.

For the most fuel-efficient Evoque possible, you'll need a three-door with the 148bhp 2.0-litre Ingenium diesel engine, which should return up to 67.3mpg (65.7mpg for the five-door). This engine is only available with front-wheel drive and a manual gearbox, and in the three-door Evoque, it emits 109g/km of CO2 resulting in a 23% Benefit-in-Kind (BiK) band for company-car drivers. Adding the two rear doors bumps emissions up slightly to 113g/km, so BiK goes up to 24%.

The more powerful 180bhp 2.0-litre diesel is only available with four-wheel drive, but opens up the option of manual or automatic transmission. With the manual, fuel economy is 58.9mpg for the five-door version, whereas with an automatic, it's 57.7mpg for the three-door and 55.4mpg for the five-door. BiK ranges from 27% for the three-door Coupe and manual five-door to 28% for the automatic. The 237bhp diesel is automatic-only and returns 48.7mpg irrespective of body style.

Unsurprisingly, figures for the automatic-only 237bhp 2.0-litre petrol are considerably worse. This engine is only available with one trim level – HSE Dynamic Lux – and with five doors. It returns 38.7mpg with CO2 emissions of 165g/km leave business drivers liable for 32% BiK tax. The same model, along with the range-topping Autobiography, can be fitted with a 286bhp version of this engine, which drops fuel economy still further. Expect 37.2 mpg and 33% BiK.

After the first year's CO2-based road tax (generally included in the on-the-road price), Range Rover Evoques cost £140 a year to tax. Those with a list price (including options) of more than £40,000 are liable for an additional surcharge of £310 a year in years two to six, bringing the annual bill to £450 during that period. 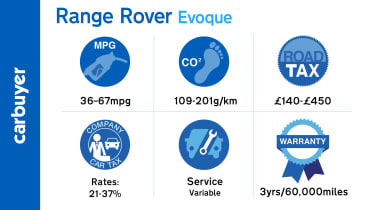 The Evoque may have lost some of the wow factor of a brand-new model at this stage, but its second-hand values are still pretty strong. You can expect a diesel model to be worth around 55% of its original value after three years or 60,000 miles, while a similarly equipped BMW X3 will have retained just 45% of its purchase price after the same period.

The Range Rover Evoque is an expensive car, with insurance costs to match its price tag. The basic two-wheel-drive model is the cheapest to cover – sitting in insurance group 28 – while the top-of-the-range petrol model occupies group 43. That’s broadly similar to the ratings for the BMW X3 – its line-up ranges from groups 30 to 43. 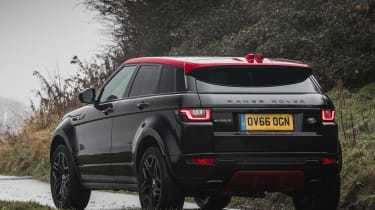 While BMW offers a three-year/unlimited-mileage warranty on the X3, Land Rover covers its cars for just three years or 60,000 miles. That seems a little stingy when a less upmarket brand such as Kia gives its cars a seven-year/100,000-mile warranty.

For a one-off payment of £500, Range Rover’s Approved Service Pack can cover your car's servicing for five years or 50,000 miles, whichever comes first. There’s also a High Mileage Plan, which increases the cover to 75,000 miles for £650. During the length of the plan, AdBlue top-ups are included for Ingenium diesel engines, along with any repairs or replacements needed to pass an MoT test (up to the value of £750).