The Vauxhall Insignia Sports Tourer has plenty of room for passengers, although the boot is on the small side for this class

At 4.9 metres, the Vauxhall Insignia Sports Tourer is one of the longest mid-sized estate cars on sale today. However, this doesn’t mean the Vauxhall has best-in-class practicality, with the sloping rear roofline going some way to explaining why some rivals have noticeably bigger boots in spite of being shorter.

The tapering roofline (in conjunction with the fairly thick rear pillars) also means the rear window is quite narrow, which restricts visibility out the back. However, the estate body style does mean that there’s more rear headroom here than in the Insignia saloon or hatchback, so anyone looking at those models might want to consider the marginally more expensive Sports Tourer if taller passengers will regularly be using the back seats.

Although it’s not quite as spacious as some other cars in this class, the Vauxhall Insignia Sports Tourer has more than enough cabin space for passengers to feel comfortable. As with the regular Insignia hatchback and saloon, there’s plenty of legroom in the front and rear seats, while the raised roofline of the Sports Tourer means only the very tallest adults will be left wanting more headroom in the back. 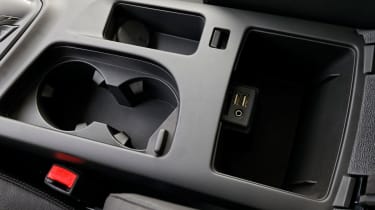 Plenty of storage places can also be found dotted about the cabin, with the glovebox and door bins in particular being of a useful size. Buyers with smaller items to stow away will also find the more compact cubbies to be very handy, while new families will appreciate the wide-opening doors and the fact that all three of the back seats having ISOFIX child-seat mounting points.

If there’s one big criticism to make here, it’s the slightly restricted shoulder room in the back seats. While this isn’t a huge issue, it’s something that may prove irritating for broader passengers, especially if they’re sharing the rear seat with other people on a long journey.

Due in part to its sloping roofline, the Vauxhall Insignia Sports Tourer doesn’t have as much luggage room as you’d expect from an estate car in this class. Though the boot itself is fairly sizeable (540 litres with the rear seats up and 1,530 litres when they’re folded down), it’s not particularly big in comparison with some rivals.

The Skoda Superb Estate, for instance, beats the Insignia Sports Tourer with its 633 and 1,865 litres of boot space with its seats up and down.

What’s more, even some cars in the class below that offer a similar amount of space to the Insignia. Even Vauxhall’s own Astra Sports Tourer has a 500-litre boot with the rear seats up and can hold 1,550 litres once they’re folded down – making it actually a teeny bit more practical than the larger Insignia. 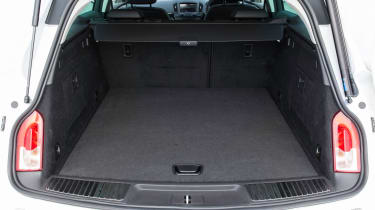 The Vauxhall Insignia Sports Tourer does redeem itself, however, by having a very wide boot opening with a low boot lip, making it easier to fit larger items in the back. The rear seat backs also fold down almost completely flat, and the boot itself (bar the sloping roofline) has a boxy shape.

One very interesting feature of the Insignia Sports Tourer is the ‘three-quarter’ setting on the optional power-operated tailgate. This can be used to control how high the tailgate opens, preventing it from hitting low ceilings in cramped parking garages.

The Vauxhall Insignia Sports Tourer’s outright towing capacity varies considerably, depending on which engine you choose. The 1.4-litre petrol engine, for instance, only has the capacity to pull a 1,200kg braked trailer, whereas all the 2.0-litre diesels bar the BiTurbo have a 1,600kg limit (the BiTurbo can manage 1,700kg).

Surprisingly, it’s the larger petrol engines that offer the best towing capacity in the Insignia Sports Tourer range. The 1.6-litre petrol is on par with the aforementioned BiTurbo diesel, while the top-of-the-line 2.0-litre petrol can tow a maximum weight of 1,800kg.