"The Volkswagen Golf BlueMotion is the most economical Golf ever, but drivability suffers, and its tax band is the same as for any other 1.6 diesel Golf." 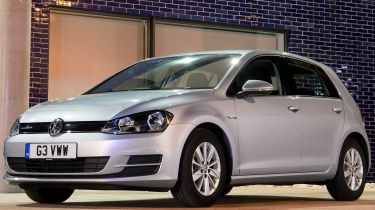 The Volkswagen Golf was one of the first cars to be treated to the brand's BlueMotion trim, after more stringent emissions targets came into effect from the European Union. Like its smaller brother, the Volkswagen Polo BlueMotion, the Golf BlueMotion has its own set of exterior details to ensure it's aerodynamic on the road. Unlike the Polo variant, the Golf BlueMotion is only available with an economically-tuned 1.6-litre TDI diesel, instead of a turbocharged petrol.

The diesel engine is capable of around 88mpg, but even the most conservative of drivers will probably only hit 75mpg. That's still very good, though, and CO2 emissions of just 85g/km means the diesel engine escapes road tax by a considerable margin. To help keep up that fuel economy figure, the gear ratios have been made longer for maximum efficiency and the small-but-aerodynamic 15-inch alloy wheels are wrapped in low rolling resistance tyres. There's a gear shift indicator too to tell you exactly when to change gear for the best economy. The trouble is, the longer gear ratios spoil driveability – you need to change gear more often to get the best from it. Plus, for business drivers it sits in the same 13% company car tax band as any other 1.6-litre diesel Golf, so in the UK it offers no special advantages, except that it’s exempt from road tax.

The BlueMotion is based on the Volkswagen Golf S, but has alloy wheels, unique upholstery, body modifications and sports suspension as part of its aerodynamic package.

There’s no doubt that the VW Golf BlueMotion is a very economical car, although you’ll need to drive very gently to get anywhere near the claimed 88mpg.It’s a comfortable cruiser and has supple suspension, despite the sportier set-up introduced to reduce aerodynamic drag and therefore improve economy.All the usual Golf attributes of space, quality, reliability and safety are unaffected, and this is one of the slowest-depreciating Golfs. There’s no road tax to pay and no Congestion Charge if you drive into London on weekdays, and it all costs only £800 more than a Golf S.

Apart from saving you a bit of road tax, there’s no real benefit for the company car drivers it’s aimed at because of the UK’s taxation structure. You’ll still be paying tax at 13%, and on a higher initial price.Performance suffers because of the longer gearing, too. It doesn’t pick up as briskly when you want to accelerate, and requires you to change gear more often. A Golf fitted with BlueMotion Technology delivers most of the same benefits with greater driveability.The 1.6 diesel engine is a bit gruff when it’s working hard and the gearshift could be slicker – the semi-automatic twin-clutch DSG system isn’t offered on the BlueMotion.

There’s no choice to be made, other than whether you want three or five doors. The VW Golf BlueMotion is a stand-alone model powered by a 1.6-litre 108bhp diesel engine.