A real standout feature: the SEAT Ibiza is genuinely spacious and practical

Thanks to a slight increase in overall width compared to the previous model, the Ibiza is very roomy inside for a supermini. It can accommodate four adults (five is possible, but the three in the rear seats will be a bit cramped) and there’s plenty of space for three children in the rear seats. The door bins are large and well shaped, while two cup-holders, a reasonably big glovebox and decent central cubby storage are all present and correct. The rear doors open very wide, allowing for easy access to the rear seats. 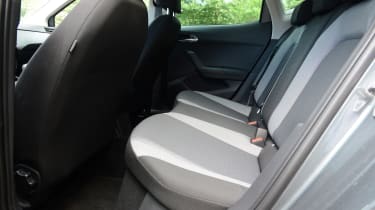 Sitting inside the Ibiza, it immediately becomes apparent that huge amounts of thought have gone into its packaging, and SEAT’s engineers have made the best possible use of the advantages offered by the car’s slightly enlarged platform.

At 355 litres, the Ibiza’s boot is huge for this class of car, offering more storage space than a Vauxhall Corsa (309 litres), Peugeot 208 (311 litres) or Skoda Fabia (330 litres). The latest Renault Clio boasts an even bigger 391 litre boot (366 litres for diesel versions) however, that's bigger than many cars from the next class up. 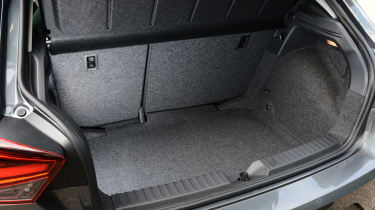 The £150 Storage Pack adds a space under the boot floor, together with cargo nets and a drawer under the front seats.

Superminis don’t tend to be bought with towing in mind, but the entry-level 79bhp petrol engine can tow a 1,000kg braked trailer or caravan, with this figure respectively rising by 100kg and 200kg for the 94bhp and 108bhp petrol respectively. The diesel can also tow 1,200kg.