The SEAT Ibiza is well built and soundly laid-out inside, even if it’s far from revolutionary

SEAT has worked wonders on the Ibiza’s suspension – it smooths out bumpy British roads in a way that small cars rarely manage. Upgrading to 18-inch wheels does upset this, however. The Spanish company has also paid considerable attention to the way its latest supermini is put together, which makes it all the more pleasant to travel in.

The driving environment hasn’t radically changed in style compared to the previous model, but there was nothing much wrong with that basic layout. Instead, SEAT has concentrated on feel, fit and finish, and the majority of surfaces that your fingers are likely to make contact with are now made from soft, tactile plastics. There are a few cheaper materials to be found if your digits stray to more out-of-the-way places, but the overall impression is one of quality and robustness. 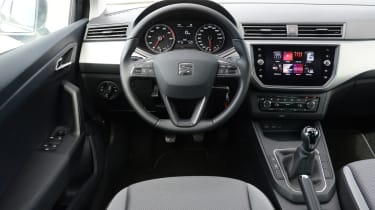 SEAT has ensured the Ibiza is thoroughly easy to live with inside. The middle of the dashboard is – like the majority of modern cars – dominated by an infotainment touchscreen that becomes more feature-packed the further up the trim range you go. Above the touchscreen sit a pair of air vents, while below are controls for the heating and ventilation.

It’s an orthodox design, but this is no bad thing, as it means the Ibiza is an easy car to get to know and live with; buyers won’t be put off by strange design elements that take explaining and learning. The transmission tunnel and gearlever are slightly higher than in the previous Ibiza, which means the latest car feels more cocooning – it’s a thoroughly nice place to sit.

The top of the dashboard and doors feature plastics that aren’t particularly tactile and are rather scratchy in places – they don’t have the ‘give’ found on the dashboard in some cars and can reflect in the windscreen in strong sunlight. These aren't a deal-breaker, but they put its design behind the excellent interior found in the latest Renault Clio. 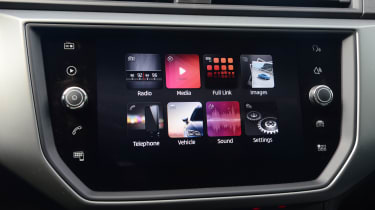 SE Technology is technically a trim level, but for about £600 over SE, the only difference it brings is an upgraded eight-inch colour touchscreen, complete with sat nav, voice recognition and an extra USB slot, along with slightly bigger alloy wheels. Unfortunately, despite its elegant looks, the latest infotainment system isn’t as easy to use as that in the previous model, but it's compatible with Apple CarPlay and Android Auto.

In their quest to minimise the count of potentially confusing buttons, Volkswagen Group's designers have scored a bit of an own goal – the infotainment system was far easier to navigate when it had more physical buttons and didn’t rely on touch gestures.

FR is next, and is the choice of the keen driver. For around £750 over SE Technology, this bundles sports seats, sports suspension, twin exhaust pipes and a bodykit, together with the kit detailed above. It also sees the rear windows tinted, brings a driving mode selector with Eco, Sport and Comfort settings, adds cruise control and a tiredness warning system. FR Sport ups the wheel size from 17 to 18 inches in diameter, upholsters the seats in grippy 'Microsuede', adds some leather trim to the dashboard and swaps conventional instruments for SEAT's Digital Cockpit. 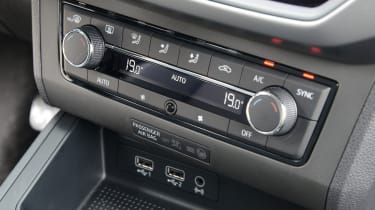 Xcellence focuses more on luxury than sportiness with extra chrome detailing, keyless entry and go, a central armrest and dual-zone climate control. It's the only model to get all-round electric windows, too – all other Ibiza trims have wind-up windows in the rear, which is a shame. Top-spec Xcellence Lux brings the Digital Cockpit, Alcantara upholstery, a rear-view camera and different driving modes.

Do make sure you give SEAT the £105 it asks for a space saver-spare wheel, as the standard can of sealant won’t repair severe punctures, leaving you potentially stranded. Metallic paint became standard in August 2018, while reversing sensors are just over £200 (standard for Xcellence) and an upgraded Beats stereo is £485. It's also worth noting that, somewhat oddly, an alarm is a £160 option for the SE and SE Technology trims. It may affect your insurance premium if you don't have one.

From summer 2018, SEAT’s Digital Cockpit became available as an option for the Ibiza (and fitted as standard in FR Sport and Xcellence Lux trims), with a 10.25-inch display replacing traditional instrument gauges. It can be customised with a View button on the steering wheel, switching between Classic, Digital and Dynamic layouts, prioritising gauges, maps for the sat nav and vehicle settings respectively.