The Suzuki Celerio is a city car at heart, so its engine offers modest power, but it’s still nippy enough to take on busy city streets with confidence.

Getting around town is made easier by steering that feels weighty enough to respond well to turns without becoming exhausting over time. The car’s turning circle is fairly small, too. The steering isn’t perfect – when you get up to speed out of town, it starts to feel less responsive.

Rivals you may want to consider here are the more expensive Hyundai i10 (which responds better than the Celerio on longer drives) and the Skoda Citigo, which offers a livelier experience around town.

The standard 1.0-litre engine is available with either a five-speed manual or an automatic gearbox, but we’d avoid the auto. It’s sluggish, unpredictable when changing gear and a little noisy. The manual, in contrast, is smooth and quiet. The more economical Dualjet version of the engine is manual-only. 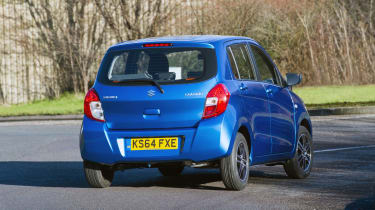 The Celerio is available with a 1.0-litre 67bhp petrol engine, which feels reasonably punchy. It gets quite loud if you push the car hard, but in this respect it’s no worse than many other small cars with similar town-focused engines.

The Dualjet engine provides same horsepower as the standard engine, but the way it produces that power means you don't have to push it quite as hard - hence the reason it's a little more economical. But without an increase in performance, it's not easy to recommend spending an additional £500 on the upgraded engine.

The little Suzuki is pretty nippy when accelerating from a standstill, but feels short on power when you get up to speed – you’ll need to keep on top of the gears to get the most out of the engine. By the time you get up to top gear, the engine runs out of steam when you hold down the accelerator pedal.

The Celerio gets from 0-62mph in 14 seconds – which is par for the course for city cars like this. This is very much a car for short journeys around town – it feels outclassed on the motorway.