Every Suzuki Celerio is well equipped, but it lacks sat nav – even as an option

The Suzuki Celerio’s interior is functional, with few design flourishes to make it stand out, but it’s all laid out in a logical manner. Loads of glass means that the car feels airy and spacious. It’s comfortable enough inside – the driver’s seat adjusts for height, but the steering wheel isn’t very flexible.

Once the car gets up to speed, the engine doesn’t make too much of a racket, even when you’re pushing on. The main problem at higher speeds is that you hear a lot of noise coming from the tyres – a bit more sound insulation would have gone a long way in this respect.

Most of the top of the Celerio’s dashboard is made up of cheap-looking plastics, so it’s a good job there are a few refinements, such as a gearlever made of softer, touchable plastic. The controls themselves are all well built, logically laid-out and feel nice to touch. 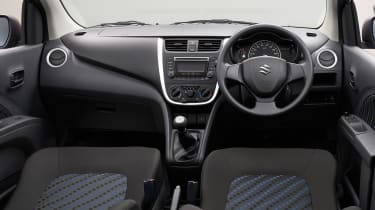 Sat-nav isn’t available on the Suzuki – even as an option – however the infotainment system is fairly straightforward to use, just not as much as a touchscreen would be.

The Suzuki Celerio has a choice of three trim levels: SZ2, SZ3 and SZ4.

The SZ2 is pretty basic, but delivers all the necessities you really need, like a DAB radio, CD player, electric front windows and central locking. The mid-range Suzuki Celerio SZ3 is our recommendation, as it throws in some luxuries at a reasonable price. Here, you benefit from air-conditioning, alloy wheels, along with a USB port and Bluetooth connectivity. 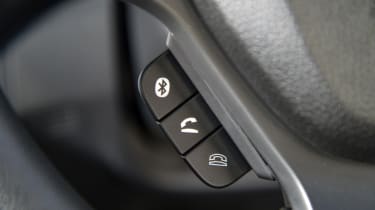 There isn’t much in the way of options to recommend or avoid, but there is a choice of metallic paint shades – we think that the electric blue colour looks really smart. You may also want to consider the red paint job, but we’d avoid uninteresting black or white.

If personalisation is your thing, it’s worth noting that Suzuki is planning to launch a new city car in the next couple of years that’ll be aimed at younger buyers – it’s a safe bet that, like funkier rivals such as the Fiat 500, this new car will offer far more in the way of potential customisation.