Crash-test scores for the Suzuki Celerio could be better; reliability should be good

At first glance, the Celerio doesn’t seem to be a great bet for safety, as it only scored average results in the Euro NCAP crash tests. But UK-spec cars are better equipped than the model that was tested, which is reassuring. The omens are reasonably good for reliability, too.

The Celerio doesn’t feel as well put-together as a Volkswagen. The plastics inside seem a bit scratchy, although this doesn’t mean they won’t last – they should all be solid enough. And there’s little in the way of complex electronics to go wrong.

As a brand, Suzuki finsihed fifteenth overall in our 2017 Driver Power owner satisfaction survey, mainly on the strength of its cars' low running costs and decent fuel economy. Not every other aspect was praised, though – Suzuki seems to lag behind rivals on infotainment and technology, while 14.6% of owners report at least one fault in the first year.

Unlike the Hyundai i10 (five years) and Kia Picanto (seven years), the Celerio’s warranty only lasts for three years of ownership – after that, you’re on your own. 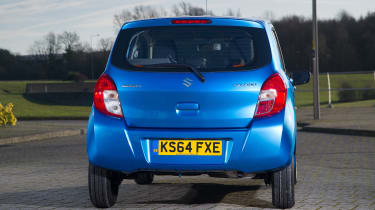 The Suzuki Celerio was put through the Euro NCAP crash tests in 2014, coming back with a disappointing three stars out of five. This is partly because of lower-than-ideal scores for occupant protection and partly because the European model that was tested didn’t have very much safety kit fitted. The score for adult occupant protection was 61%, child protection 74% and pedestrian protection 68%. Among its rivals, the Hyundai i10 and Toyota Aygo scored four stars, while the impressive Skoda Citigo achieved the full five stars.

The UK Celerio’s safety kit, which is slightly better than the version that was crash-tested, includes six airbags, electronic stability control, tyre-pressure monitoring and (on the Dualjet model) hill hold to stop the car rolling away when starting or stopping on a slope.