Not only is the Porsche Cayenne the car that kept the company in business, it's also a practical and versatile SUV that's fun to drive 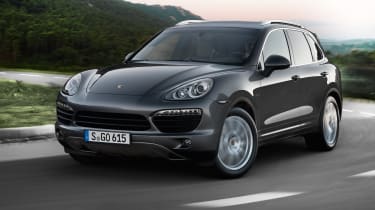 Some cynical Porsche fans turn their nose up at the Cayenne SUV and think of it a marketing exercise, but that really does this 4x4 a disservice. Not only has its popularity helped to bankroll Porsche's sports-car development, but it's also a practical five-seat SUV that delivers surprisingly good economy and an involving drive. And not many rivals can match the Cayenne's all-round ability.

If you're looking at the Mk2 model, there are a wide range of models on offer, including two types of diesel, high-performance turbocharged petrols and even a plug-in hybrid with CO2 emissions on a par with the Toyota Yaris Hybrid. The trade-off for this is high maintenance costs, but if you can budget for that, then the Porsche Cayenne Mk2 is an interesting proposition.

The second-generation Cayenne was launched in the UK in 2010. It shares a platform with the Volkswagen Touareg, although the Cayenne was developed and is built in-house by Porsche to give it a distinct character, and to that end its engines and electronics are shared with the Porsche Panamera saloon.

Another eco model is the Cayenne S Hybrid. This was launched in 2010 with a 3.0-litre V6 petrol, an electric motor and a battery under the boot floor, while performance falls between the standard Cayenne and the S. In 2014, it was replaced by the Cayenne S E-Hybrid, which featured a 410bhp version of the 3.0-litre V6, plus the ability to plug the car in to charge the battery for an estimated all-electric range of 22 miles.

As well as introducing the E-Hybrid in 2014, Porsche facelifted the rest of the Cayenne range in 2014. The update was subtle, but also saw a 410bhp 3.6-litre twin-turbo V6 added to the Cayenne S, more power for the Turbo and Turbo S and lower emissions for the standard Cayenne Diesel.

Which is the best Porsche Cayenne model for me?

The entire Cayenne Mk2 range is enjoyable to drive for such a large SUV, so it really is down to your budget and needs as to which model you go for. If it's practical family transport you're after, then the Cayenne Diesel is all the car you'll need, although if you're looking at newer models, have the charging facilites and do lots of short urban trips, then the E-Hybrid model is worth investigating. The older Cayenne Hybrid is unlikely to be as efficient as a diesel of the same age, as it tends to rely on the petrol engine more frequently.

Go for anything beyond these models and high running costs are on the cards, but if you want a more involving drive, then the Cayenne GTS is a desirable option. It has fantastic handling for such a large SUV, and is nearly as fast as the Turbo in corners. 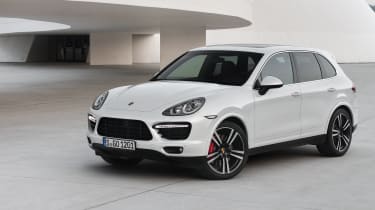 If you must have a Turbo, then the Turbo S is the one to go for, as it was the world's fastest SUV for a while. Just don't expect any more than around 20mpg fuel economy if you're using its maximum performance.

Diesels command a slight premium thanks to their better efficiency, while the fast GTS and Turbo models are also priced higher, but have taken the biggest hit when it comes to depreciation.

As standard, all cars feature dual-zone climate control, powered leather seats and cruise control, but beyond that the spec of a used Cayenne will be entirely up to the choices made by the original buyer, as Porsche offers a raft of upgrades. The benefit of this is that used buyers can get a well-specced example for not much more than a basic example, as most of these extras don't add value to the car.

While Porsche developed the Cayenne Mk2 to be sporty, it's also reasonably efficient for a car of this size. All models get stop-start and the Cayenne Diesel has claimed fuel economy of 39mpg. The V8 Diesel S isn't far behind, at 34mpg, while the older Cayenne Hybrid matches that figure. CO2 emissions for this trio are 189g/km, 218g/km and 193g/km respectively.

The leader of the low-emissions pack is the Cayenne E-Hybrid. A CO2 figure of 75g/km is similar to that of the Toyota Yaris Hybrid supermini, so it currently qualifies for free road tax, although how close you get to Porsche's claimed 80+mpg fuel-economy figure entirely depends on how often you fill the car. And if you use the engine to recharge the battery when you're on the move, you'll easily dip below 30mpg. 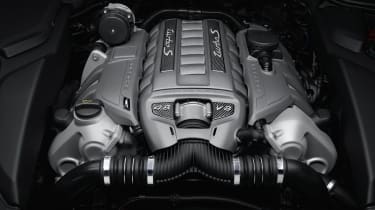 The high performance Turbo and Turbo S deliver sports-car-style economy, too. Stop-start and cylinder deactivation technology helps, though, and a return of 25mpg isn't bad for a car that can accelerate up to 176mph. Whichever model you go for, insurance costs will be steep, as even the Diesel S sits in group 49.

Porsche is a premium brand and it charges a premium rate for servicing. All models need an oil change every 12 months or 9,000 miles, Intermediate maintenance is every two years or 18,000 miles, while the Major service is at four years or 36,000 miles – whichever comes first. You can expect to budget at least £500 for servicing, but as it's every two years, it's reasonable value when compared to some rivals.

In addition, the brake fluid needs changing every two years, while the air filter and spark plugs on petrol cars are replaced at a four-year interval.

The Porsche Cayenne is a big SUV, and while the Mk2 was lighter than the car it replaced, it can burn through tyres and brakes at an alarming rate if you use its performance to the max on a regular basis. Check the car you're looking at has plenty of tread left on its tyres and there's plenty of material on the brake pads, too.

If you're looking at a Turbo or GTS, the upgrade to carbon-ceramic brakes was expensive, but helps keep maintenance costs down – cars fitted with them get yellow brake calipers to mark them out.

Few Cayennes will have ventured off-road, as the four-wheel-drive system doesn't have a low-range mode, so there's unlikely to be any serious issues with the drivetrain as a result. 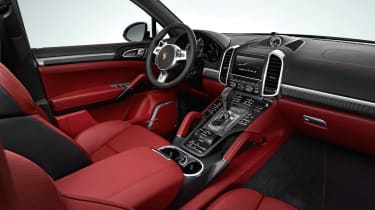 All models feature a raft of electrical kit, both in the cabin and under the bonnet, so it's worth checking that everything works properly, otherwise it's likely to be an expensive repair, even at an independent Porsche specialist.

There have been four recalls for the Cayenne Mk2. The first in February 2012 affected all cars and related to a flimsy headlight unit mount, which could work loose in certain conditions. In July 2012, there was a recall of 54 Cayenne Turbos and Panamera Turbos for faulty turbochargers, which would result in poor running and potentially cause a fire. 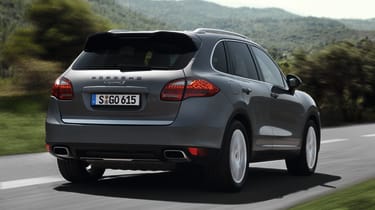 In January 2015, petrol Cayennes and Cayenne S Hybrids built between March 2011 and May 2012 were recalled to replace faulty fuel-injector rails, while the entire range was recalled in March 2016 to check a circlip on the pedal bracket that could cause the brake pedal to dislodge, which would affect braking performance.

The premium SUV class is booming at the moment, and there are a host of capable rivals for the Cayenne Mk2.

The car's main rival for sporty driving is the BMW X5, although the Cayenne is the handling benchmark in the class. If you're after something a bit quirkier, then the BMW X6 SUV-coupe is also available, but it's essentially identical to the X5 under the metal.

The Mercedes M-Class (now known as the Mercedes GLE) is a sensible alternative to the Cayenne, while the platform-sharing VW Touareg has a similar amount of space, even if it can't match the Cayenne for driving fun. It's also marginally cheaper than the Porsche, thanks to the less desirable VW badge on the nose.

If you need practicality, then the seven-seat Volvo XC90 is worth a look, while the Audi Q7 offers even more space while using similar running gear to the Cayenne diesels. If you want to fly the flag for the UK, the Land Rover Discovery offers more space than the Cayenne, while the Range Rover Sport matches the Porsche's upmarket feel. Go for a second-generation version and you'll find it's nearly as good to drive as the Cayenne, too.

Aside from that, the rare Infiniti QX70 offers a lot of car for the money, while owners rave about the Jeep Grand Cherokee, although the V8-powered SRT8 model can't match the Cayenne Turbo's performance.

While Porsche is a sports-car maker, the Cayenne Mk2 is a surprisingly practical and versatile upmarket family car that just happens to deliver a sporty drive. The Diesel and Diesel S deliver reasonable everyday running costs, although maintenance costs for the entire range are expensive. 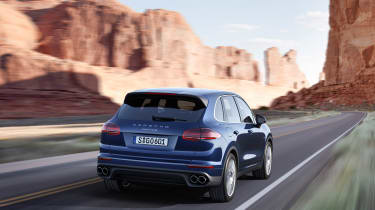 The wild Turbo models deliver stupendous performance, although you'll pay a price in terms of running costs, so if you must have a sporty variant, the GTS version delivers a good mix of performance and costs. Of the hybrids, the plug-in E-Hybrid is a great technical showcase that could save you hundreds in fuel bills – as long as you keep the battery charged – but the older Hybrid isn't as good an overall purchase as the Diesel.