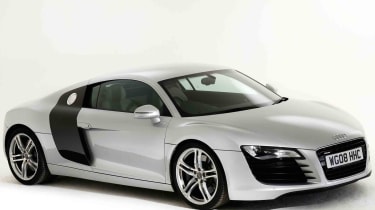 Audi has seen massive success with the Audi TT sports car and has sold some extremely powerful saloon cars like the Audi S4, but it took until 2007 for the first Audi supercar to come to light. When it arrived, it was far better than many expected.

Intended as a direct rival for the Porsche 911, the Audi R8 is mid-engined and dramatically styled, with contrastingly coloured ‘side blade’ air intakes and a low-slung shape. Despite its ferocious looks, though, drivers immediately found the R8 remarkably user-friendly; this is among the easiest supercars to live with on a daily basis.

In 2003, Audi had tantalised lovers of high-performance cars with its Le Mans concept car, pictured below. However, few expected it to make the transition from fantasy to production with such little dilution from the concept. It certainly made its rivals sit up and take notice, and buyers soon faced a long waiting list. 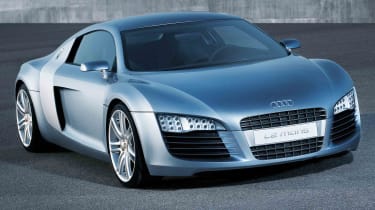 It was no surprise when reviewers praised the Audi R8’s speed and handling, but what really stood out was just how accessible its power was. Far from intimidating, the predictable four-wheel-drive handling made the R8 easy to drive. It was also less expensive than its exotic looks suggested, starting at a little over £75,000.

Its two-seat layout is a little inflexible, there’s not much storage space and its looks still turn heads, so the R8 isn’t a car for the sensible or attention-shy. It’s probably not practical enough to serve as your only car, but it’s far less highly strung and easier to live with than many of its rivals. 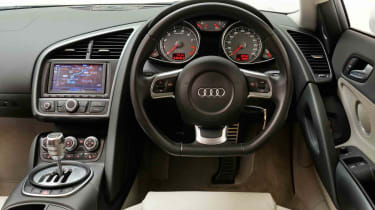 Another advantage is that the R8 mainly uses technology and engineering proven in other Audi models. This provides reassurance for those who may have previously suffered burnt fingers from the temperamental nature and expensive maintenance regimes of other supercars – the R8 is as well built and dependable as any other Audi.

Although the R8 is now into its second generation, the original version is still very sought-after. You can buy one for less than half the price of a brand-new second-generation R8, though, and it’s considerably better than half as good. Follow our buyer’s guide to find the right one for you.

When the R8 was first unveiled, power came from a 414bhp 4.2-litre V8 petrol engine that had already proven its worth in the Audi RS4 performance saloon and was even more impressive in the lighter, more compact R8. Audi’s relationship with Lamborghini (both companies are part of the Volkswagen Group) came to the fore in 2009 with the R8 V10, which used the same 582bhp 5.2-litre engine as the Lamborghini Gallardo. A convertible Spyder version was introduced in 2010, first with the V10 engine, but a 4.2-litre V8 version was added in 2011. You could choose a conventional six-speed manual gearbox or an ‘R tronic’ automated manual. 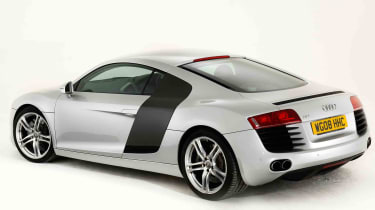 The 4.2-litre V8 engine got a power boost to 424bhp in September 2010, while a full facelift was launched in July 2012. A more sophisticated dual-clutch S tronic gearbox replaced the clunky R tronic at this point, while LED headlights, sat nav, Bluetooth connectivity and heated seats became standard across the range. The 543bhp 5.2-litre R8 Plus was released at the same time and crowned the range until the Mk2 R8 came out three years later.

Which is the best Audi R8 Mk1 version? 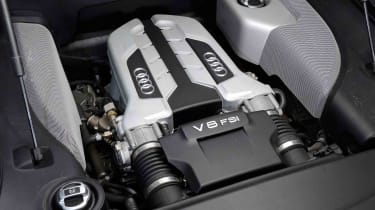 As fast and sonorous as the 5.2-litre V10 engine is, the 4.2-litre V8 is arguably a better bet. It’s cheaper to buy second-hand and more economical, while the extra weight of the 5.2-litre engine actually makes it less nimble and enjoyable to drive. It’s also fair to say that on public roads, you’re unlikely to need much more power than is produced by the V8 engine. 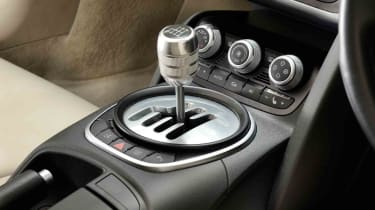 The six-speed manual gearbox has an open metal gate, a la Ferrari, which looks great but actually makes changing gear a little cumbersome; it’s a far better setup than the original R tronic automatic, though. For this reason, we advise you go for the manual gearbox unless you’re looking at facelifted R8s with the S tronic auto.

Cars with ‘Audi Magnetic Ride’ have a clever two-mode (Normal and Sport) adjustable suspension system and we recommend seeking these out, as the two programs have a discernable effect on the way the R8 drives and give it something of a split personality. 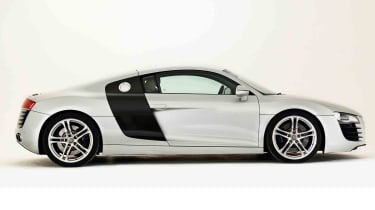 Buyers could have a field day with options, with silver ‘blades’ for the middle of the bodywork an £800 option, or carbon-fibre examples being roughly twice that. Taste is a very personal thing, but many consider the silver option more aesthetically pleasing.

If you can find a car with sat nav and the Bang & Olufsen stereo, pity the original owner who dropped £3,000 on those only to wave goodbye to them again. Strangely, parking sensors, heated seats and cruise control weren’t originally standard, although these were more reasonably priced so should be relatively common additions.

Cars like the R8 are always expensive to run, so fuel economy of around 20mpg is unsurprising, as is the annual £515 road-tax tariff all models incur. The same goes for insurance, as the R8 sits in groups 48-50 out of 50. Also be aware that you’re better off running the R8 on 98 octane super unleaded fuel, which adds about seven or eight pounds to the cost of a tank of petrol.

One of the nice things about the R8 is you can use Audi’s dealer network for maintenance. True, servicing costs are high compared to an Audi A3 hatchback, but £485 for a minor and £925 for a major service are veritable bargains at this end of the market. Add an extra £100 or so to those figures for the V10 model. Audi doesn’t over-inflate the cost of regassing the R8’s the air-conditioning (£79) or replenishing its brake fluid (£89), despite it being one of the company’s most expensive cars. 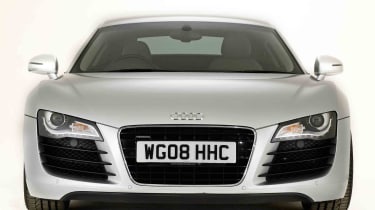 Speaking of inflation, the R8 isn’t particularly hard on its tyres, but budget anything from £700 to £1,000 for a set depending on which brand you go for; given the R8’s performance, we suggest not skimping here.

A new set of brake pads comes in at around £360, while pads and discs nearly double that. If you’re looking at an R8 with carbon-ceramic brakes, triple or quadruple those pad prices; carbon-ceramic discs should last for a very long time, but they’re four figures to replace. 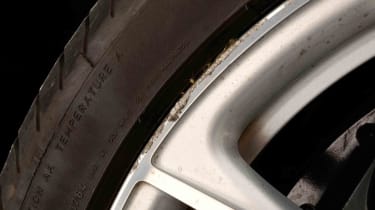 The R8 has a strong reputation for reliability, but there are a few things worth looking out for. Check the alloy wheels and tyre sidewalls for signs of kerbing damage, as they’re both susceptible to this. 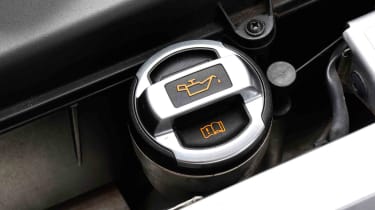 Low-mileage cars get through a lot of oil, although this habit lessens the more the car is driven. The interior is durable, but have a look at the driver’s seat bolster for signs of wear. The R8 has only been subject to one recall: cars made between April 2009 and June 2011 needed work on a potential fuel leak, but this is easily fixed. 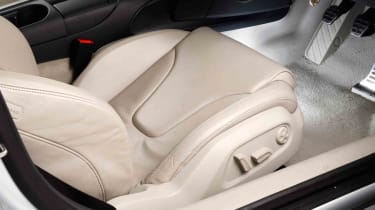 The R8’s biggest enemy is the racetrack. Many owners have taken their cars to private circuits to properly enjoy their performance and if you suspect this is the case, be wary. Tracked cars will have been used hard, with brakes, clutches, gearboxes and engines all getting a thorough workout. Demand proof of meticulous maintenance with any car, but especially one you think has been tracked.

Walk away from any car with an incomplete service history, although given its age some Mk1 R8s may have been taken to an independent garage rather than an Audi dealership for maintenance. This isn’t necessarily a bad thing, but be sure any non-Audi garage that’s been used is an R8 or performance-car specialist.

The Porsche 911 (for which we also have a used buying guide) has got to be on any R8 buyer’s shopping list, assuming they don’t already own one. It’s just as user-friendly as the R8 and actually has four seats (although the rears are token efforts), but some may feel Audi’s first supercar is a little more special.

Do consider the Nissan GT-R, too. It’s also a four-seater and has just as much (if not more) cornering ability and performance as the R8, but some are put off by the badge and complex electronics, while many examples have been modified beyond the limits of rationality.

Have a look at the Lamborghini Gallardo, too, although it’s pricier to run and buy; the same goes for the Ferrari F430 and Ferrari 458 Italia. The Aston Martin V8 and V12 Vantages are also worth considering, although neither has quite the handling finesse of the R8. 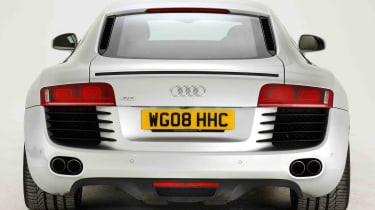 The original Audi R8 is a really special car, but the brilliant thing is it doesn’t need really special treatment. Sure, it’s significantly more expensive to run and maintain than a normal car, but normal cars don’t get from 0-62mph in as little as 3.6 seconds. Factor in the beautiful interior, four-wheel drive and a host of sophisticated safety systems and you’re left with a supercar that can be used for everyday commuting, but will make you feel like a hero when the mood takes you.