The safest cars to buy 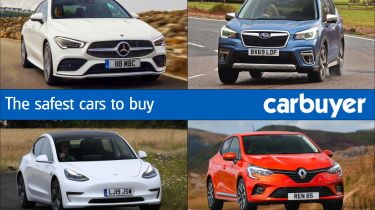 Choosing a car based on which one is the safest is becoming increasingly difficult because most modern cars offer a high level of protection to their occupants in an accident and have technology to potentially prevent accidents from happening in the first place. That’s down to the vast array of safety technology available, including older mandatory systems such as anti-lock brakes (ABS), electronic stability programmes (ESP) and ISOFIX child-seat mounts, as well as newer technology that includes autonomous braking (AEB) and lane-departure warning systems.

Understandably, the safety score of a new car is still a key factor in many buying decisions and the majority of the cars on sale in the UK have been given car safety ratings by Euro NCAP (European New Car Assessment Programme), giving consumers the ability to see which are the safest.

Tyre safety - what you need to know

One confusing aspect of Euro NCAP testing emerges when trying to make an accurate comparison between cars of different ages tested to different testing standards. Euro NCAP updates its testing criteria regularly in order to reflect ever-improving safety technology and construction methods, making it far tougher for a car to score a five-star rating.

The changing ratings given to the VW Group’s trio of city cars, the Volkswagen up!, SEAT Mii and Skoda Citigo, are an illustration of how Euro NCAP testing has been made tougher over the years. In 2011, all three models received a five-star rating but in 2019 they were retested and were only awarded three stars. Minimal changes to the cars’ original design and safety technology meant their scores dropped when tested to the latest, more stringent standards.

The ever-stricter testing is good news for buyers overall, as it keeps pressure on manufacturers to make their cars as safe as is currently possible, in order to achieve five-star safety ratings. A new car cannot be considered one of the safest in its class without a recommendation from Euro NCAP.

Euro NCAP publishes an annual ‘Best in Class’ list derived from the results of all the cars tested in a calendar year. In 2019, a total of 55 cars were crash-tested, with 41 achieving a five-star safety rating, making it one of the most impressive years since testing began in 1996. Here, we run through the safest cars you can buy as recommended by Euro NCAP.

The Tesla Model 3 was a double winner, taking the accolades in both the ‘Large Family Car’ and ‘Hybrid & Electric’ categories. The 94% achieved by the Model 3 is the highest ever score in the safety assist category. It was awarded a five-star rating overall, scoring similarly in the remaining categories with 96% for adult occupant protection, 94% for the included safety equipment and 74% for vulnerable road user protection. 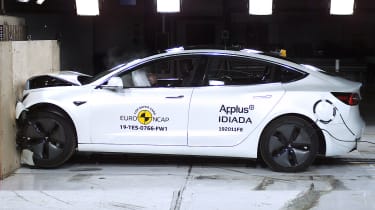 The Model 3 comes well equipped as standard, with an array of airbags, automatic emergency braking, speed assistance and lane-keeping assistance. The Model 3 is one of the safest cars on sale today, with Tesla claiming that its compact electric powertrain makes it even safer than a conventionally powered car, thanks to large crumple zones and a rigid passenger compartment. Read more.

A joint winner with the Model 3 in the ‘Large Family Car’ category, the latest BMW 3 Series is the most technologically advanced generation yet, with the new model getting a raft of safety technology that helped it to score 97% for adult occupancy protection - one of the highest scores ever awarded by Euro NCAP. As part of its five-star rating, the new 3 Series also scored 87% for both child occupancy and vulnerable road user protection. 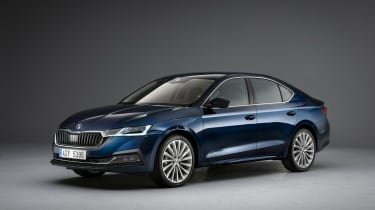 Named as a runner-up in the ‘Large Family Car’ category, the new Skoda Octavia impressed on its way to a five-star rating. Part of this strong performance was an adult protection score of 92% and an 88% score for child occupant protection. The new Octavia is offered with collision avoidance assistance, emergency steering assist and predictive cruise control, while the car’s traffic sign recognition, traffic jam assistance and lane-keeping functionality have all been improved over the old model. Read more. 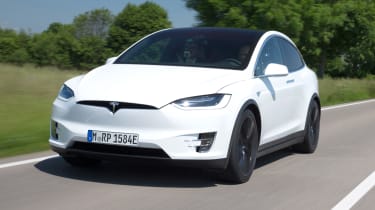 In showrooms for nearly three years by the time it was tested, the Tesla Model X earned a five-star score in late 2019 and was safest in the ‘Large Off-Road’ category that year. It scored an impressive 98% and 81% for adult and child occupant protection respectively. In the safety assistance category, the Model X scored a 94% rating - a score only equalled in 2019 by the Model 3.

The Model X packs a huge amount of safety features, including an active bonnet to mitigate pedestrian impacts and automatic emergency braking that functions via a series of bodywork mounted sensors and cameras to alert the driver to a potential collision. It can even help steer the vehicle to avoid an obstacle. The Model X was also named as the runner-up in the ‘Hybrid & Electric’ category in the Euro NCAP ‘Best in Class’ of 2019. Read more. 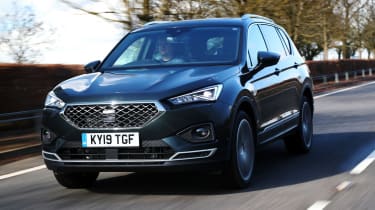 The SEAT Tarraco is the brand’s range-topping seven-seat SUV and it scored a maximum five-star Euro NCAP rating when tested. During testing, the Tarraco scored an exceptional 97% in the adult occupant category. Across the range, autonomous emergency braking (AEB), lane keep assist, and automatic emergency call are standard equipment, earning the Tarraco a 79% rating in the safety assist category. The Tarraco also features SEAT’s pre-crash assist system, which can react in 0.2 seconds to prepare you for an accident by tightening seatbelts, closing windows and the sunroof, as well as activating the hazard lights during and after a crash. Read more.

Following on from the Mercedes A-Class hatchback in 2018, the Mercedes CLA performed impressively during crash-testing earning five-stars from Euro NCAP and winning the best ‘Small Family Car’ in the ‘Best in Class’ picks of 2019. 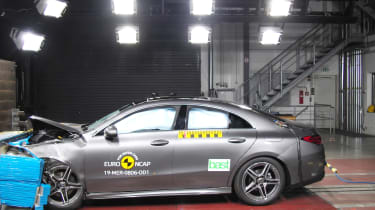 When tested, the CLA scored highly for both adult and child occupant safety with scores of 96% and 91% respectively. It also scored impressively for pedestrian safety, achieving a 91% rating. As standard, the CLA is equipped with key safety technology such as automatic emergency braking, lane keep assistance and what Mercedes calls an ‘Active Bonnet’ system that automatically raises the rear of the bonnet to help mitigate an impact with a pedestrian. Read more. 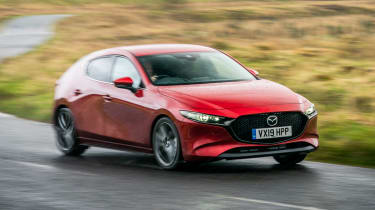 The Mazda3 managed a record 98% score for adult occupant safety, a result that has only been matched by three other cars in Euro NCAP history. An 87% rating in the child occupant category was also impressive. As standard, the Mazda3 hatchback gets automatic emergency braking, which reacted to prevent all collisions during testing. Further standard safety kit includes blind spot monitoring, rear cross traffic alert and intelligent speed control. If you step up to the range-topping GT Sport Tech trim level, tech is improved further still with the cruising and traffic support (CTS) system, which has the ability to assist with acceleration, braking and steering in traffic. Read more. 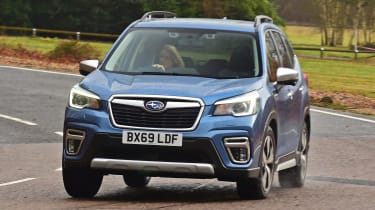 During Euro NCAP testing, the latest Subaru Forester proved it’s as rugged as it looks with an impressive five-star rating. It scored 97% for adult occupant protection, 91% in the child occupant category, 80% for pedestrian protection and 78% for safety assistance.

The Forester’s standard autonomous emergency braking system was praised by Euro NCAP, avoiding collisions in all test scenarios. It features Subaru’s EyeSight Driver Assistance system that scans the road ahead to identify hazards such as vehicles, pedestrians and cyclists. The Forester can also detect when the driver is tired and apply the brakes while reversing if a hazard is detected. Read more. 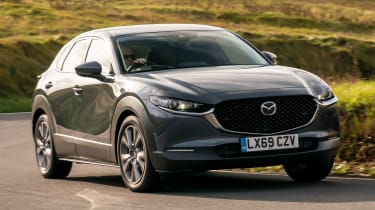 The Mazda CX-30 shares its safety technology with the Mazda3 hatchback, which helped it excel in Euro NCAP tests, achieving a five-star rating overall and a 99% score for adult occupant protection, which is the highest category score ever awarded. The CX-30 also scored 86% for child occupant protection, winning praise for its whiplash protection for passengers in the back seats. An array of onboard safety technology earned it a 77% safety assist rating, and it achieved 80% for its protection of vulnerable road users. The CX-30 gets lane keep assist and autonomous emergency braking (AEB) as standard. Read more. 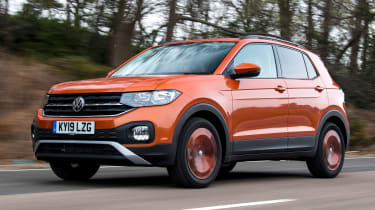 Euro NCAP gave the Volkswagen T-Cross a full five-star score when it was tested in 2019. It earned 97% for adult occupant safety, 86% for child safety, 81% for pedestrian safety and 80% for it’s on-board safety tech. Standard safety kit includes pedestrian and cyclist protection, automatic emergency braking and front assist detection. The T-Cross also received praise for its ability to withstand severe side impacts, where it scored maximum points in both tests. Read more. 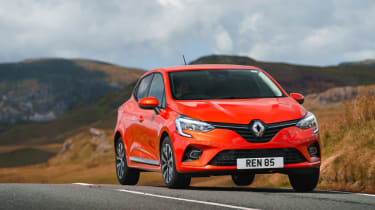 The latest Renault Clio scooped numerous awards last year, winning the Carbuyer Car of the Year and Best Small Car awards. The Clio also triumphed in the Euro NCAP ‘Best In Class’ of 2019, winning the ‘Supermini’ accolade thanks to a five-star safety rating, including a 95% score in the adult occupant safety category.

The joint winner in ‘Supermini’ category for 2019, the Audi A1 received a vast array of new safety technology such as lane departure warning, which prevents you from going over a white line at speeds over 40mph. It also features front radar that continuously scans for road hazards including pedestrians, cyclists and other vehicles, sounding an audible warning and automatically applying the brakes if the driver fails to react in time. 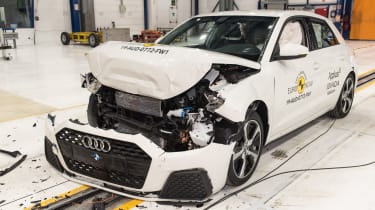 Euro NCAP awarded the A1 five stars, matching the SEAT Ibiza with which it shares numerous parts. It performed impressively across the board, with 95% for adult protection and 85% for child protection. Read more. 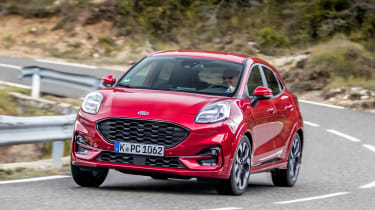 The new Ford Puma is a crossover based on the same platform as the current generation Fiesta hatchback. The Puma earned five-stars from Euro NCAP before it had even arrived in showrooms, scoring an impressive 94% for adult occupant protection and a maximum score in lateral impact tests for its rear child restraint system.

Top versions of the Puma get 12 ultrasonic sensors, three radars and two cameras to assist the driver on the road and during parking manoeuvres. Autonomous emergency braking also features, along with Ford’s intelligent speed limiter and lane keep assist. Read more.

Now you're all up to date on the safest cars you can buy, why not check out Carbuyer’s recommendations for most economical family cars, and most economical 4x4s, SUVs and crossovers.