“Dear Carbuyer, I’m looking for a saloon that’s good to drive and comfortable on long journeys, what do you recommend for £15,000?” 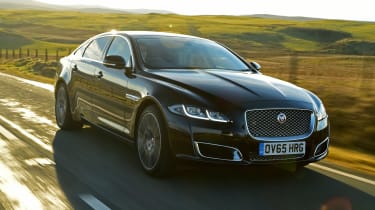 An executive sports saloon should be a car of many talents, one that offers a high level of comfort, swift performance, precise handling, and of course, plenty of luxury. But with models like the Audi A7 and BMW 8 Series Gran Coupe starting at nearly £50,000 when new, buying a used car is often the only way of finding something affordable.

Large executive sports saloons have a habit of losing their value very quickly. After three years, it's not uncommon for cars of this type to be worth around half of what they cost when new. Buying a used example and avoiding the initial depreciation often makes them great value.

Regardless of the purchase price, the cost of running a sporty executive car remains high. Most models come with a choice of a V8 petrol engine or a six-cylinder diesel engine, which means fuel bills will be substantial. It’s worth finding a used car of this type with a comprehensive service history, as most of them use complex engines and electronics that can be very expensive to repair if they go wrong.

Nearly all executive sports saloons are flagship models and offer the performance to match this status. Most are very capable, with V8 petrol models capable of 0-62mph in around five seconds or less. Diesel equivalents are not far behind either, with most capable of reaching 62mph from standing in around six seconds.

You can also expect composed and agile handling despite the size of these cars, plus a slick automatic gearbox. Rear-wheel drive is most common in the BMW and Jaguar performance saloons of this era, with only Audi offering all-wheel drive in the A6, A7 and A8.

Expect kit like leather-trimmed seats, climate control, sat nav, a premium stereo system and bluetooth music streaming as standard in exec sports saloons. Refinement and comfort are expected too, making them the perfect choice for longer journeys, with a decent amount of space for rear passengers. Luggage space will also be good too, with most offering a boot large enough for family holidays.

Our reader is looking for a large executive sports saloon that’s good to drive and capable of covering long journeys in comfort. Thanks to depreciation, there is an array of models available for a budget of £15,000. We’ve focused on three flagship performance models, with all offering a powerful petrol and diesel option, along with sporty handling and plenty of luxury features.

The fourth-generation Jaguar XJ was a huge leap forward for the British brand, which confidently strode away from the dated styling of its predecessor with a fresh design.

The XJ has tight handling, an excellent driving position and a range of powerful engines, which combined to make this the best driver’s car in its class in its day. Your budget will buy any XJ of this generation. you can have an immaculate 2015 60,000-mile 3.0-litre V6 diesel or an older, higher-mileage supercharged 5.0-litre V8. 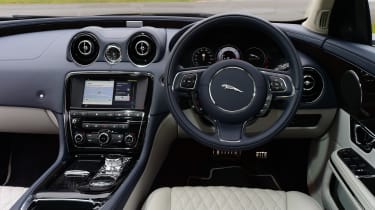 Thanks to its quick steering and relatively light aluminium body, the Jag outshines both the BMW and Mercedes if you’re in the mood for some spirited driving. When coupled with Jaguar’s 503bhp V8 engine, it’s a properly quick car, too, and balances this engaging drive with a comfortable ride. 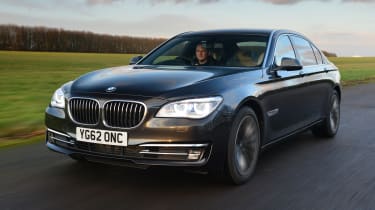 This version of the 7 series was a technological tour de force, offering a strong choice of engines and an arsenal of cutting-edge technology, such as adaptive dampers and a four-wheel steering system. 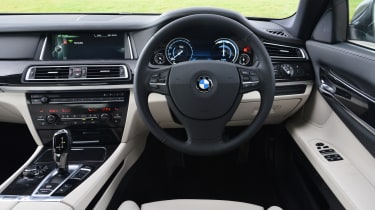 BMW played it relatively safe with the 7 series’ interior when compared with its rivals, but it’s standing the test of time better than the rival Mercedes CLS. BMW’s iDrive infotainment system and a 10.25- inch digital instrument binnacle are feature-rich and intuitive.

Although the 7 series isn’t quite as sharp to drive as the XJ, it’s more engaging than the CLS. The popular 730d model is powered by a 254bhp 3.0-litre diesel engine, which blends brisk acceleration with decent economy. The V8 option is more lively but, unsurprisingly, you’ll pay for this at the pumps. 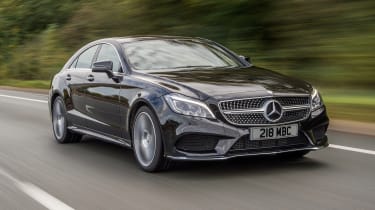 The Mercedes CLS defined the four-door coupé niche when it was launched in 2004, and while the Mk2 was less daring, it’s still attractive. it can’t match XJ for driving thrills, nor the 7 series for practicality, though. 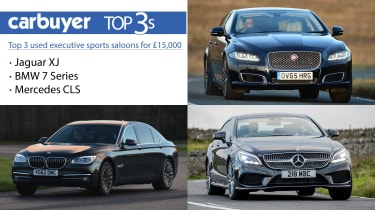 Compared with the Jag’s and BMW’s, the CLS’s cabin has aged less gracefully, although the 2014 facelift added an eight-inch infotainment system and a new steering wheel. The tapered roof and lack of standard folding rear seats limit practicality.

The Mercedes CLS strikes a decent balance between comfort and engagement, but it errs more towards the former. That may suit you if you prioritise long-leggedness over thrilling driving, though. The quickest option with this budget is the 255bhp 3.0-litre V6 diesel, which will do 0-62mph in 6.5 seconds.

All three of our picks are excellent luxury sports saloons but if it were my money I’d buy the 7 Series. It offers the best driving experience of the trio regardless of which engine you pick, while also being the most luxurious model here. 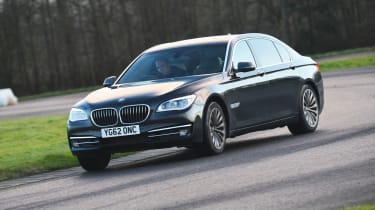 While a car the size of a 7 Series shouldn’t be sporty to drive, the fifth-generation model belies its vast dimensions with an agile and composed chassis. It also looks great by modern standards, with a subtle and somewhat understated design when compared to modern BMW models. Although it’s from the mid-2010s, the interior of this 7 Series still seems opulent and there’s enough technology to keep it feeling modern. 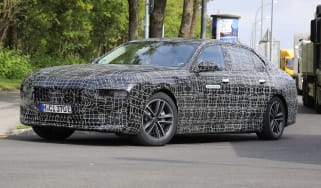